A Letter to Olivia 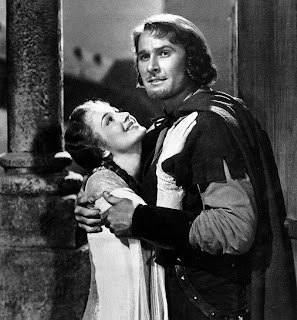 Even though I've been at my desk all day today, I can't really say I've been working a whole heck of a lot.

Emails, some random phone calls, a couple of blog posts, catching up on other favorite blogs...and now the next thing on my To Do list: write a letter to Olivia de Havilland.

I guess I should explain first. Long story short, The Boy and I have a new acquaintance in Paris, a Canadian-born chef who we've been in correspondance with regularly, now known as Our Man in Paris. Somehow last week, he and The Boy got on to the subject of Errol Flynn, and Our Man in Paris drops the fact that he knows Olivia de Havilland personally.

In fact, he doesn't just know her. He's friends with her. He goes to her house and cooks for her and hangs out with her.

The Boy called me at work to tell me this, and I pretty much had a little crazy (quiet) fit at my desk. If you've been reading my blog for a while, you'll probably get the idea that I'm a huge classic movie fan. I can't say I'm a movie buff because I'm not that educated, but I adore old films and always have.

To say that I haven't admired Olivia de Havilland in several films is an understatement. She was a talented actress and was also the first person to take on the formidable Hollywood studio system, resulting in a landmark case ruled in her favor against the Goliaths of Hollywood.

But to say that I haven't daydreamed a million times of being her as Maid Marian in The Adventures of Robin Hood, with her fabulous succulent lips and lush fake lashes and wearing tight bias-cut silk gowns and crowns and wimples and kissing Errol Flynn in glorious Technicolor--do you have any idea how many times I've seen that movie since I was, like, eight or nine years old?! She's kissed Errol Flynn more than any other actress, I'm sure of it.

This afternoon, I went out and bought a really beautiful card. I want to send the card to Our Man in Paris and have him give it to Ms. de Havilland in person. But I'm afraid to put pen to paper, either because I'll crap up the card and waste $5.00, or probably more likely that I'll write something really stupid.

I'm really stuck though. How do you start writing a letter to a two-time Oscar-winning actress that you've admired all your remembered life? I have no idea what to say.

Because this is what I really want to ask her:

You don't know me, but can we just cut to the chase here? You're so beautiful and all, and I loved you in Gone With The Wind, Captain Blood, The Charge of the Light Brigade, and of course The Adventures of Robin Hood, but what was it like to kiss Errol Flynn A LOT? Please tell me NOW!"

Do you think she'll write back?

Posted by tangobaby at 5:03 PM

I'd send the card exactly as written - it has just the right amount of star-struckness, admiration, and humor, and I'm certain all these years she's been dying to tell folks about kissing Errol Flynn.

But maybe cut out the little foot stomping at the end.

Ha ha, Johanna. You are awesome. I was stamping my feet, wasn't I?

What if I just leave out the word NOW! at the end?

I just watched a documentary about Flynn where de Havilland was interviewed about him. She's the cutest and perkiest lady you ever set eyes on. If I am half as vivacious as she is at 91, I will be beside myself with joy.

In this documentary, she told a little naughty story about the famous kissing scene on the balcony in Robin Hood. How she purposely kept screwing up the scene so they would have to re-take it over and over again, and by the end of the shoot, let's just say that Errol had a bit of difficulty with his tights. It was classic.

I'm really on the verge of buying a plane ticket and giving her the card myself!

Hey, you just go around once, right?

What do you say to a beautiful actress and Hollywood legend?

She said her best performance was in "Snake Pit".

I believe she was unique in "Hush...Hush, Sweet Charlotte".

Then, of course, a lot more great performances...which makes me a fan...

Thank you for visiting my blog and telling your wonderful story. What a great opportunity to spend with a screen legend! I can not even begin to imagine what a treat that must have been for you.

I totally agree with you. They don't make them like they used to, and the saddest thing is that so many people have no idea what they are missing.

I have not yet seen The Snake Pit, but will do so on your recommendation. ;-)