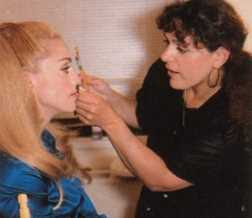 Last week, I had another lesson after work. But this time, I was the teacher. I gave the lesson. A private makeup lesson in the not-so-private, but exquisitely decorated, cosmetics department of Neiman Marcus, one of my former haunts.

I haven't done a makeup lesson in a while, and it was such a fulfilling hour to be doing something I really love where I am not the student (i.e., tango). Sharing your expertise with someone, when you really know what you're talking about and your student is eager to learn, is a fantastic feeling.

I'm sure I must have mentioned this before, but I used to work as a professional makeup artist. I was lucky enough to learn from the best in the biz, the lady on the right, Laura Mercier. And also from some of her extremely talented disciples, who have gone on to have successful careers in their own right. I have a lot of fantastic tricks up my sleeve thanks to my teachers. Over the years, I've touched a lot of faces. It may sound silly, but I know I've also changed a lot of lives, in big and small ways, by being a makeup artist and showing women how to use cosmetics in a subtle, artistic way (and how to pull out all the stops if that's what they want). I've worked with brides, frumpy housewives, newly divorced women, rich ladies recovering from plastic surgery, cancer patients going through chemo, little old ladies, teenage girls, men, models, and actresses.

The other day, I was trying to explain to a male friend of mine about cosmetics, and why women get so excited about them. I was hoping that everything I said did not sound trite or something out of a 1950s treatise on How to Be a Lady. But I was having a hard time explaining why some (most?) women get a little ga-ga for makeup, myself included, when we're supposed to be educated and focused on so many other things than our appearance. I mean, how shallow can you get? I can have a serious discussion with you about string theory or scurvy, but the minute you ask me what my favorite lipgloss is, my eyes will light up in a feverish way.

We live in a time where our culture has done a lot to blur the distinction between male and female, I think in an attempt to let us all advance ourselves without gender being a discriminating factor, as much as humanly possible. Because of that, women today have many advantages now that our mothers and grandmothers did not have in their lifetimes, allowing us to have many more options regarding our careers, family life and other areas too numerous to mention. The flip side, I think, is that we have lost some (or a lot) of our femaleness as a result. Which is denying a large part of what makes us who we are, imho. And that always brings me back to the tango thing, but for right now this is still a makeup story.

I think women have an innate need to see beauty, whether it is something outside them, or something beautiful about themselves. It may just be a function of cultural conditioning, but if it is, then it still must have some basis in our genes or has been imprinted in us for centuries. Cosmetics fulfill a need that is hard to describe but humans have been using them for thousands of years.

Laura taught me to regard the face as a perfect canvas. To see and enhance the fine and beautiful qualities of the face that are there already. It's not about focusing on what's wrong with you, what you don't like about yourself, but about playing up the parts of you that you do like. I've learned to look at faces with an objective eye, in pieces instead of a whole, if I want to. I can quickly discern lovely features that are waiting to be unearthed, like I'm an archaeologist who's just found a shard of pottery that when cleaned and polished, will turn into a museum's treasure. I'll tell a woman: you have a beautiful brow shape, I love your cheekbones, look at how pretty your upper lip is, and she'll look at me with wonder and maybe a little puppy love in her eyes and say, Really? I never saw that before.

You show people themselves in a mirror after you've done their makeup, and sometimes they cry because you've just helped them look the way they always wanted to, so their inside dreams match the outside face that the world sees. It's like showing someone a face they never knew they had but one they always wanted. And it's real.

Posted by tangobaby at 6:30 PM

Nothing is more humbling, or satisfying, than seeing how what you have done for someone has touched them so deeply. I'm so happy you had a chance to relive that experience.

Oh, I found this to be a lovely story, TB! As Johanna, I think it must be fantastic to know that what you do can make so much who put their trust in you.

Even though I was a fashion model for about 8 years, and I had many makeup artists "do" my face, you, my dear, did the most beautiful job ever on that memorable morning at the Stanford Neiman Marcus.

It was natural, fresh, subtle, and it brought out the best in me.

You are an artist!

this proves once again how incredible you are and how lucky we are to have you in our lives.

You just made what I've always found a pretty depressing subject sound really quite possibly pleasurable and interesting.

Nice work, making people more beautiful.
I wonder if someone could tell me which eyeliner will not come off while dancing? I have tried a bunch of so called waterproof or smudgeproof liners, with mixed and messy results. Any ideas? I remember an entry somewhere about this, but cannot find it>

I've been using an eyeliner called Make Up For Ever which I got at Sephora. So far, stays put pretty darn good.

Tangobaby, I think I love you.

Let's all get together and have a tango dress up/makeup slumber party and Johanna will bring the chocolate. Wouldn't that be fun?!

You guys always make my day. I wish I was playing with all of you now.

Big XOs to all of you for the sweet comments.

Mmmm. Chocolate. I can do almost anything as long as there's chocolate.

oh please count me in for your make-up tango lusciousness ~ i'll bring the bubbly! ;o)

Bubbly has to be served after we do the eyeliner. So we don't look like crazy people who tried to do our makeup while intoxicated.

Like you, and so many others, I love makeup and all the yummy girlie-ness that comes with it. I remember going to an upscale makeup counter months before my wedding. I wanted to practice. While I was there I had an impromptu makeover and bought some product. What I remember most was that I was wearing a white t-shirt. Sounds like no big deal, but I really thought I didn't look good in white. So, I was determined not to buy a white wedding dress. I remember looking in the mirror after the makeover and the first thing I thought was, “Goodness, I do look good in white!” I did buy the white wedding dress I dreamed of - and looked great, too. Thanks for the memory.

thank you for sharing your memory. I have to say that working with brides has been a mixed bag for me as a makeup artist. I wish I had only met a sweet bride-to-be like you. We would have had a ball!

I'm glad you learned something about yourself during that encounter that made you see yourself differently and for the better!