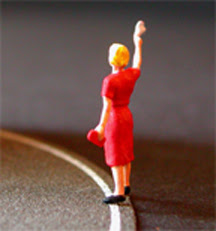 In between some serious product testing of the various types of cold medications (they're all crap pretty much, except maybe for Mucinex) and different kinds of Kleenex (the ones with aloe are the best), I had one glorious, sparkling day of health where I felt fabulous and I went dancing. It seems so long ago, but it was only last Friday.

I went to one of Roberto's last classes and milongas here in the U.S. My teacher Roberto is moving back to Argentina. I get the impression that if it's not a permanent move, it's somewhat semipermanent and he's going to be gone for a while.

Roberto was the first teacher I had who didn't teach me steps. In fact, the first class I took with him confused the heck out of me because it seemed like he wasn't teaching "tango" at all. Where were the patterns, who steps where and does what when? Instead, Roberto had us doing exercises like pretending to hold invisible beach balls between us and our partner, and putting our hands on our partners hearts and moving (not dancing) with our eyes closed. I seriously didn't get him at all.

I almost didn't go back after that first time because I didn't think I was going to learn anything about tango with Roberto. Ha, shows what a dummy a smartypants girl can be. I'm so glad I got over myself because, if it wasn't for Roberto, I'd probably be doing some form of Tango LEGO. Plug-n-play tango.

Roberto is one of those guys that truly has a twinkle in his eye. His eyes sparkle with humor, sometimes devilish, but always with fun. He's got the most charming, crookedest grin, too. Roberto has a thick accent and lots of times I still don't really understand what he's saying. But at the end of the day, the lesson still sinks in. He makes us laugh, but at the same time, teaches us things like no one else can.

I ended up going to Buenos Aires with Roberto and some of his other students. It was a totally random last-minute decision, but it was because of him and the experience he created for me in BA that completely changed how I came to understand tango and why I love it now the way that I do. On our trip, Roberto took all of us under his wing, but made each one of us feel special. Whether it was making sure we got home safely from a milonga, interpreting an ardent admirer's invitation to "get a coffee" (remind me to tell you about that someday), dancing with us when no one else would cabaceo us, Roberto was there for us. He taught us how to appreciate the music we listened to, why a good DJ is so important, and how to admire the styles of tango from all periods of history.

At this last milonga, I just had to ask Roberto for a tanda. Because he's the DJ and also the teacher, I feel funny about asking him (or any teacher for that matter) to dance with me because, well--maybe he wouldn't want to dance with me socially, just because he's my teacher. But he ended up making a whole tanda (with five songs, no less), and even though I'm sure I screwed up royally a few times, I wanted to savor every moment I could get with him. I reminded Roberto of a dance we had together in Sunderland: it was a vals and he was doing all of these crazy little things where he was playing with my feet while we were dancing, and I couldn't stop giggling. It was so fun. I felt like I was gliding like a swan but at the same time having the best little joke. Roberto didn't remember this, but it's one of my favorite memories of BA.

Just thinking that I won't get to see Roberto after January reminded me of that classic song We'll Meet Again:

Ciao, Roberto. Safe travels to you and lots of love, always.

Posted by tangobaby at 8:46 AM

You are one of the fortunate few to have a "Roberto" be your first real Tango experience. Having had one of my own, I know how difficult it is to lose them.

How those "LEGO tango" instructors still manage to get students in the area harboring one of the largest, best-quality Argentine tango communities outside Buenos Aires? It never fails to puzzle me. I still bump (sometimes, literally) into people who have NO IDEA about lead and follow.

Farewell, Roberto, you will be missed!

Johanna, you're so right. And to think I almost never went back to him after the first class. Just goes to show you how most of us are taught: he steps here and she does that. But I have this feeling that someday he'll be back...or else I'll just have to go to BA and say hello.

Frances, were you at the milonga on Friday? I have this little fantasy that I'll be sitting next a charming Asian lady I don't know and I'll ask her if her name is Frances and she'll say yes!

To answer your other thought, I just hope that those other students find people like Roberto sooner than later. I'm lucky to have Shorey and Ney because I think they compliment what I've learned from Roberto.

Helas... I have been inder the weather for quite a while, so not much dancing lately.
I hope to make it to one of Roberto's farewell milongas. He hosted the secong (not the first!:) milonga I had ever attended. Sweet memories.

Man, I'm really gonna miss the maestro. It's weird to think of the SF tango scene without him. I feel like he was among the few "authentic" Argentine tangueros (not to put down anybody else) and I always loved watching him dance because it never seemed like something canned. One of my favorite memories of local tango performances was when he danced with Mariana Dragone at Studio Gracia, and all the crazy things he was doing with her feet in milonga, her with a big sh*t eating grin on her face the whole time. Among my proudest moments in tango was when, unasked, he praised my dance to a new acquaintance. And a favorite quote, regarding the notorious Argentine hubris: "We're not arrogant, we're just perfect!" Buen viajes Roberto, y nos vemos pronto!

Roberto taught me how to listen for and dance to the phrasing in the music. Of all my teachers he is the only one who makes a big deal about this. Thank you, Roberto!

I hope you're feeling better very soon. Hopefully I'll see you at one of Roberto's events before he leaves. Get well!

What you described with Roberto and Maria made me smile. That's exactly what he did to me. I don't know how he does it or what exactly he is doing but it is so fun that you can't help laughing. That was a lovely compliment he gave you. He is very genuine and kind.

I agree with you. Roberto has an amazing amount of knowledge about music and wants to share that with his students (and I think he's a great dj, too). But mostly he wants you to feel the music. Thank you for reading my blog. It's nice to hear from you.

I don't know Roberto but it seems he was (has been) doing a good job spreading the real tango! As for Tango Lego, people that have two eyes, two ears and something in between those two ears will eventually understand that what they are dancing is a semi-low grade ballroom version of tango. And to be honest, if with the immensitude of internet, youtube videos and good blogs like this one they still don't get it maybe they weren't made for this...