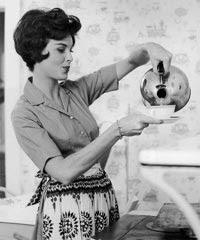 The way to a man's heart is still through his stomach, but it doesn't hurt if you can amaze him with some random trivia, too.

We have a rule in my kitchen. You are welcome to keep me company while I am cooking, but you have to sit in the chair against the wall so that you aren't in my way. I don't like people getting underfoot while I am cooking.

So there is a designated chair in the kitchen for visitors. The Boy is now accustomed to being in his special seat while I make him meals. He keeps me company by reading to me, oftentimes something by Dave Barry, an essay on film by Roger Ebert or Pauline Kael, once in a while something about the history of baseball (for my general edification and improvement of character), but lately he's been reading a Bill Bryson book to me.

This morning, while I was making The Boy fresh berries and cream, he was flipping through his book and quizzed me, "So, what happened on October 4, 1957?"

It took me a split second to reply. "That's when the Russians launched Sputnik."

Although my back was turned to him, I could feel the waves of astonishment emanating from his chair. "How did you know that?!!"

"Because I do." (I think pulling that information out of my head at 7am is actually more impressive than knowing the fact itself.)

Challenged, the almost picked for Jepoardy contestant continued, "Okay, smarty. What was the name of the American satellite program created in response to Sputnik?"

"WHY DO YOU KNOW THESE THINGS?!"

Apparently, this little interaction has been impressive enough to launch me into the stratosphere of girlfriends. I may be at the forefront of the imaginary Girlfriend Race.

How do I know these things? The heyday of the American space program happened years before I was born, or at least in the years before I was sentient. When other freshman girls in my English class were deciding what sorority they might pledge, I was reading a galley copy (still don't remember how I got it) of an autobiography of Chuck Yeager and his stories about flying the X-1 into the history books.

I grew up in the era of the space shuttle, the minivan of outer space. But inside I pined for my missed opportunity to see the first moon landing as it was happening, instead of in movies and television programs. Of course I was interested in the Mariner and Viking probes, but they were unmanned and not in the same realm of unadulterated human courage.

Why do I care? Because to me, the space program of the 50s, 60s and 70s represents what Americans can do when they want to. That we can use math and physics and engineering in ways that make science exciting and hopeful. I realize this is a very simplistic and optimistic view of our space program, and intellectually I know that these achievements are driven by military and strategic interests. But the offshoot of this exploration is that it shows us that there's so much more to our universe than the day-to-day lives we lead.

That we might be infinitesimally tiny but we can still do great things.

Right after I finished The Boy's breakfast, I turned on the radio to hear that the space shuttle has a new mission this Saturday: to fix the toilet on the International Space Station. And while the crew is up there, they are going to leave a Buzz Lightyear doll in the space station, "in order to help educate children across the country."

Gone are the days when having a man walking across the lunar surface in a spacesuit, his only protection against the unforgiving extremes of space, would inspire kids to be interested in science, to inspire them to have goals and dreams. Now we have Disney and Pixar to educate them instead.

Posted by tangobaby at 9:32 AM

Disney and Pixar, indeed. Takes all of the real wonder out of such scientific achievements and feats of engineering, doesn't it?

I grew up in the '50s and '60s and remember well when normal classes in school were preempted so that we could all listen, spellbound, to radio broadcasts of Alan Shepard and later John Glenn being sent into space. I had models of the the Vanguard (which was the name of the rocket that sent the first American satellite, Explorer I, into space), the Redstone and Atlas rockets, books by Willy Ley, Charles Yeager, you name it.

To hell with Disney. Thankfully, NASA has amazing websites that cover in great detail all of their missions and the Phoenix mission is being covered blow by blow on Twitter.

I am always amazed at the tiny lagoons of knowledge that surface at the most unexpected times. You bring back great memories TB. I sat, with my family, spellbound in front of the B&W TV as Neil Armstrong descended onto, and bounced about on, the moon. So, am I dating myself or what?

I think that the constructive/productive imagination can be stoked by many things - even animated films.

I've been concerned for a while that the art of general knowledge and trivia has passed from popular culture.
I've been doing my best to recall things without looking them up on google- I fear the brain won't work as it used to if we look for the easy way out instead of challenging our brains.
"not in the same realm of unadulterated human courage."
Courage is a word I don't hear used much anymore. It seems, sadly, to belong in another era.

This is a great post. I love your compendium of knowledge and how you love science.

The thing I really connected to was that you two read aloud to each other. Jeffrey and I do that, too. We almost always have a good book going. Actually, between us we normally have upwards of 1o. The chapter book we are reading to Sloane, the one we are sharing aloud, the individual books for pleasure, the individual professional books... You get the picture.

It is so much fun to choose read aloud books to share. For a long time years ago, we would take turns reading aloud a childhood favorite that the other had missed. Boy, did we discover some good books that way.

We may have to do Bill Bryson next. Happy reading to you and The Boy.

Aw Geez! I forgot to mention that I really love Bill Bryson. I read Notes from a Small Island before we went to London, and it is because of him that I/we had an orgasmic experience with Sticky Pudding....

"Now we have Disney and Pixar to educate them instead."

Sad, isn't it? When the younger generation is all about: sports, gaming, Hip Hop, pop stars...

I so love books. Passionately. I cannot understand why education now comes from a screen, from a corporate entity communicating sanitized, watered-down...ugh. Well, I don't need to preach to the choir here.

TangoBaby, it does not surprise me at all that you know these things. You are one smart cookie, curious and beautiful, and you are a real catch! I am sure the Boy knows that already. WE should get together and have a drink with Chudk Yeager.

I think you've described ME perfectly: wistful and hopeful. Or at least part of the time...

Your childhood memories are ones I would have loved to have. I cannot even begin to imagine how exciting those missions must have been, not only for children, but for adults as well.

I don't know what Twitter is exactly, but I like to keep NASA TV on my computer so I can listen to it while I'm puttering around the house and can pretend I'm in Houston or Cape Canaveral.

You're not dating yourself, but I'm glad you can remember that important achievement (I'm sure you were very tiny at the time)!

As far as entertainment and animation providing inspiration for children, I think our country already suffers from an overload of escapism into fantasy. I think it would be marvelous if children could be exposed to incredible possibilities in a way that doesn't have anything to do with CGI, computer games, etc.

I'm of the camp that the reality of things is far more exciting than anything we can make up, and I think that kids would be benefitted greatly if we allowed them to see life that way.

Okay, I'm getting off of my soapbox now.

My brain works in fits and starts...it's amazing all of the information I don't retain anymore!

To your other point, I think that courage exists all over the place and in many facets of our country and the world, but that it's not in the government's or mainstream media's interests to promote such things. Our society is so fear-based and it works better for those groups to keep us afraid and out of touch with what we are capable of achieving.

I'm not surprised that you and Jeffrey share a love of reading aloud to each other, or that you are Bill Bryson fans. I have to say that The Boy does the bulk of the reading aloud because someone has to do the cooking. If we would reverse roles, that would be bad.

Plus he has a lovely speaking voice and is a very good reader.

Thanks for the recommendation...that's one of his books I haven't read and I don't think we have it. I'll put it on the list.

The younger generation is about all of those things because that is what we offer them as recreation and as role models. We only have ourselves to blame for the shallowness of future generations.

Instead of replying to the part that makes you shudder (because it makes me do the same), can we skip to the fun part and get together with your grandpa and hear Chuck Yeager stories?!!!! You are full of so many surprises ALL THE TIME.

Thank you for the lovely compliment! (It was a trememdous ego boost today that I needed.) Maybe Red Shoes can help us out with the drinks department. ;-)