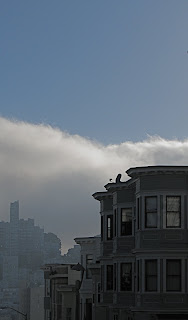 Our weather came back to its senses (thank goodness). The heat wave is over.

Our fog is back!

I wore a coat and boots today.

One of the reasons I love living in San Francisco is because of the movies.

Not for the latest movies at the cineplex downtown, but to see movies where I can catch a glimpse of history in my own town. 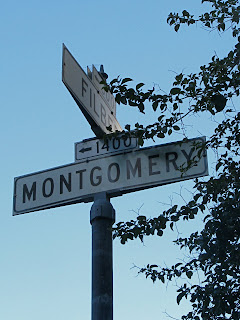 Back in the day, San Francisco was the location of choice for many wonderful films (and I'm not talking about cheesy business like Mrs. Doubtfire and Basic Instinct).

Dashiell Hammett's The Maltese Falcon, Hitchock's Vertigo, Francis Ford Coppola's The Conversation, the classic San Francisco noir D.O.A., just to name a few...these films and many others are a visual time capsule of San Francisco.

Whenever I see one of these films, as much as I am enjoying the story itself, I am loving every exterior shot, wanting to see how much of these locations are left the way they looked in the film. Sometimes those places are gone and only film preserves their memory, but lucky enough, some locations are still left with some semblance to years past.

I have, in more recent years, become a Bogie appreciator. I will admit that it took me longer to recognize his quiet demeanor and love him for his style than some other actors I adore. But now I love him. 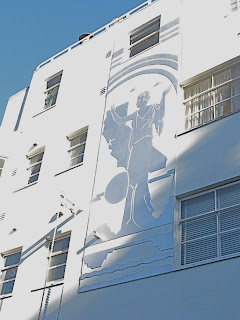 I finally saw the movie Dark Passage last week, being on my to-watch list for a while. Filmed in many locations in San Francisco, including Market Street, Telegraph Hill and Fort Point, I think it's the best pairing of Bogart and real-life love (and wife) Lauren Bacall, even though the movie did not do well at the box office. But it's a true noir, with all the requisite twists and dark characters, except that this movie has a happy ending. 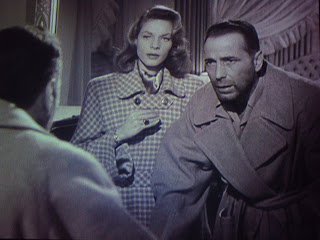 What turned out to be a fun pilgrimmage this weekend was to find the Malloch Apartments on Telegraph Hill, where the lovely Bacall takes in wrongly accused, recent San Quentin escapee Humphrey Bogart. 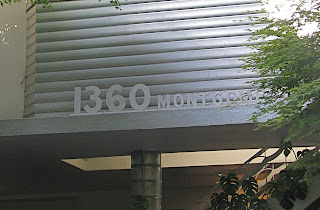 Located on a crazy steep incline, otherwise known as the Historic Telegraph Hill District, this Art Deco wonder of an apartment building stands on a cliffside overlooking the entire bay.

I pictured Bogie up there, in his hideout from the cops, with Lauren Bacall playing "Someone To Watch Over Me" on the phonograph, while I stood at street level, wishing it was all real.

And it kinda was.

Nicely put, tangobaby. This really is one of the things that makes living in San Francisco so delicious. The Crawford Apartments, Hammett's first S.F. residence, are within a few short blocks of where much of The Maltese Falcon took place; although the Falcon was written after he had moved from there into his apartment in the Tendernob.

I love that first photograph. And now I want to go back to SF so bad I can taste it. :-\

I couldn't agree more! The fog was a sight to behold! It must have been a day like yesterday when Carl Sandburg wrote FOG:

It sits looking
over harbor and city
on silent haunches
and then moves on.

Thank you for suggesting the movies; I will definitely add these to my movie list. My favorite San Francisco movie is Hitchcock's "Vertigo". The scenes at the Palace of Legion Honor convey the serene feeling beautifully. I also love how Kim Novak managed to keep every hair in place even after falling into the bay.

Thank you, and I knew you would have something fun to add to this post. I have not done any Maltese Falcon investigations yet, but I'll look forward to that too.

I took that photo from the top of Telegraph Hill looking down into North Beach, as the fog was blowing in at a nice, fast clip.

I think it would be a very good idea for you to come out here, and bring all of your hats and wear them all over town--people would love them! And you in them.

How lovely to have this poem today. The fog was awesome, wasn't it? We cheered it: yay, fog!

I have more movies to suggest (of course) but those were the ones that came to mind most readily. A few months ago (after the SF Noir Festival) we did a Vertigo trek to see Scotty's apartment (that was SO cool, omg) at the base of Lombard street, at Jones. And of course the Brocklebank Apartments next to the Fairmont, which look EXACTLY the same and you totally expect Kim Novak to come out any moment (with her perfect hair, LOL).

One more film that I really like that features a part of SF that is totally gone is Jules Dassin's Thieves Highway. First of all, it's an awesome movie (Dassin is one of my favorite directors) and secondly, it takes place in the produce markets, the "Les Halles" of SF, where the Embarcadero towers now stand.

When you rent D.O.A., be sure to get the 1951 version with Edmund O'Brien and not the crappy remake. The scene when he is running down Market Street is awesome (and know that the filmmaker's did not have a permit to film on the street, so all of the people watching him are totally surprised as to what is going on). And that movie, hands down, has one of the best openings in a movie, ever.

I'll think of more movies for you, but those are a great place to start.

Oh wow, I love this post.
When we lived in California we took my visiting Mater to San Francisco. Why? Because she'd been watching cop shows for a good portion of her life-
'Streets of San Francisco,' to name just one, and she wanted, just once, to experience the feel of the roads just like on TV when the cops chased the bad guys and the car would come up over the hill suddenly, not touching the ground? She was so, so happy to be there. I'll never forget it.
Great post, happy memories.

Okay, it's official. I totally love Mater. She has to come back to SF and maybe I'll bottom out the Passat on a hill or two, or rent a Mustang for her.

You should get her a DVD of Bullitt with Steve McQueen. She's love it! It is my understanding that those chase scenes are even more highly regarded by race fans than even The Streets of San Francisco.

Hi Tangobaby,
I popped over from Tara's blog. Can you give her a hug from Tammy at dinner tonight?

I love San Francisco and old movies. I enjoyed this! I've moved an hour south of Tahoe.

Thank you for popping over, and you bet I will be sure to give Tara a special hug for you.

You want to hear the best thing of all? She is staying AROUND THE CORNER from this very building! When she told me her address, I had to laugh. I made her promise to go for a walk around the corner and see this place for herself.

Mater will be so glad to hear she has a new fan.
Seeing the roads was the one thing that meant anything to her. She loved all of San Francisco but that was special.
Those hills...and we've been on Lombard Drive.
Off to my corner now to weep into some old pictures :(

What a cool way to spend the weekend! Hmmm, which great movies have been shot in Sydney.... :)

As a guy, I happened to like Basic Instinct. I thought some of the views in the movie were breathtaking.

Please do tell Mater that someone in San Francisco thinks she's special. And no crying in the corner...just save up so you can come back here.

I would love to know what movies have been filmed in Sydney. That would be cool! I know Errol Flynn was from Tasmania, but that's the extent of my geographic knowledge about where you are...

As a guy, I have no doubt that you enjoyed certain scenes of Basic Instinct! LOL!

However, I still wouldn't rank Basic Instinct as a classic film...unless the criteria for judging great movies has changed dramatically.

I was filming in Sacramento this weekend and to drive back from the oppressive heat and see a beatiful bridge that led to the clouds in the sky was fantastic!

Growing up in the Daly City/Colma area I've gotten more fog than most. I've never seen it as gloomy, sad or depressing. In fact, it's always been rather invigorating and inspiring for me.

As a kid I always knew when we were almost home from a road trip because you could see and feel that cool bay fog in the distance.

My girlfriend laughs because she loves the sun and I love the fog.
She's my little ray of sunshine and I'm her little rain cloud. =p

I love the San Francisco evoked in Vertigo. Sadly, though I lived in LA, I never got to know San Francisco. I'd love to see more of it. The fog certainly sounds intriguing... -X

The imagery of you being the little raincloud and your sweetie being the sunshine reminded me of that Winnie the Pooh scene where he's trying to fool the bees. ("Tut, tut, it looks like rain.")

I agree with you about the fog. Sometimes I will sit all cozy in the recliner with a book and watch it blow in, just like a magic blanket. It hides everything past the houses across the street and the whole world is different. Love it.

It's like that saying, "so close, yet so far." Even though LA and SF are geographically close, their worlds can be very far away.

From what I can tell of you and your interests, your love of exploration and diverse people, I think you would really enjoy a visit here.

I think we should do a house swap and I'll go to Cambodia and see the spirit houses of Kep.

When we lived in Chattanooga we had an old fashioned movie palace. Palace being the operative word. It was all gilt and rococo roses and gorgeous. They did a Bogie film revival and played a double feature of Key Largo and the Maltese Falcon. An old boyfriend took me there for our second date. I dated him too long - I think on the strength of that one amazing date.

Watching these movies in the wonderful old theatres is amazing, isn't it? The seats may not have cupholders, but by god, they sure have the right atmosphere.

You can't fault the guy too much: he had great taste in movies, and women!

I LOVE love Key Largo! It is right up there on the Bogart-ometer after Casablanca. What an incredible cast, especially my faves Edward G. Robinson and Claire Trevor. That is such a great film!

I just loved that movie and staying just around the corner from that apartment is such a treat! Great shots you took. xoxox