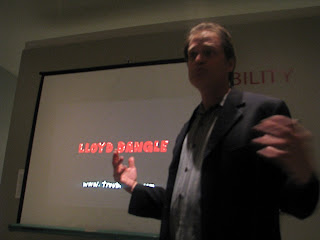 Last night The Boy and I went to see a friend of his, Lloyd Dangle, give a presentation at the Cartoon Art Museum. (Yes, it has been a week full of art. We are very fancy this week.)

The Boy introduced me to the comic strip Troubletown a couple of years ago, and I've been laughing (and cringing inside because it's painfully true) at this comic strip ever since.

Most of you are very, very familiar with cartoonist Lloyd Dangle's work, even if you don't know his name. If you've ever felt under the weather and picked up a package of Airborne at 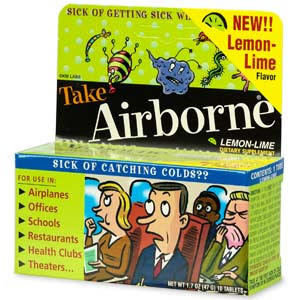 the drug store, Lloyd is the guy who drew the art for the packaging, with the sick people and the little crazy germs. (Personally, I think the art is the best thing about the product, since it certainly hasn't ever kept me from catching a cold.)

Anyway, Lloyd is a really cool guy, kinda quiet and maybe a little shy, but he's got a wicked sense of humor and tells it like it is. His comic strip Troubletown is twenty years old this year, and if our politics keep on going the way they are, Lloyd will never run out of things to draw.

Lloyd gave a presentation about himself and his work, where I learned a lot about:

a. Michigan (I did not know that it is called The Mitten! How cute! I guess that lack of geographic awareness is part of what happens when you grow up in California, in addition to not knowing what snow is).

b. Why Ronald Reagan may not have been the president many fondly remember now. But how Bush will keep artists working for decades to come.

c. What to do when crazy people send you mail that looks like it could be a bomb.

and d. How to draw a cartoon likeness of John McCain. (It involves a potato. I am not going to give away the secret...you'll have to learn for yourself on the tutorial on his blog.) 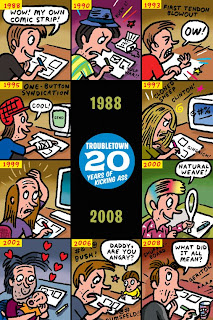 Aside from all of that knowledge, I also got my own copy of his newest book, Troubletown Told You So: Comics that Could've Saved Us from This Mess, which is amazingly prophetic yet hilarious. Not only do I have the book, but it is autographed, bears not one, not two, but three anniversary stickers that proclaim "Cartoons that Kick Ass," and it is signed to his Core Fan, which I now apparently am.

I don't know what responsibilities lie in being someone's Core Fan but I am going to find out and then do my darnedest to live up to my new role.

(So start reading Troubletown and buy a book. Especially if you are from The Mitten.)

Posted by tangobaby at 6:08 AM

b. Why Ronald Regan may not have been the president many fondly remember now. But how Bush will keep artists working for decades to come.

I would have liked to have heard this portion of the evening. I have never understood the burnished glow that surrounds Ronald Reagan.

Well, for starts, he gently reminded us how Reagan blithely ignored the beginning AIDS crisis, how he demolished the mental health care system and put a lot of ill people onto the streets without any care, and how he had an interesting pal named Ollie North.

But I guess compared to the disaster that is currently in office, I can see how some people would need to be wearing their rose-colored glasses right now, just for a little respite.

Now I have to see what sorts of hats you have been wearing recently.

There's a burnished glow around Reagan? In the UK he was the president we laughed at hardest, till Bush Jr turned up. Our image of him is a bumbling senile ex-actor who we occasionally saw standing next to Thatcher nodding and smiling. QV this clip from Spitting Image.

Hope I haven't offended anyone there. I'm just saying I hadn't realised anyone thought of him positively.

No, you're totally correct about Reagan. (And thanks for the reminder about Spitting Image...that was such a great show.)

The thing is that it is SO depressing here about who's bought/stolen two elections now (oops, did I say that?) that anybody, even Reagan's dog, is looking like we had it pretty good back then. So some people are wistful, apparently.

But I live in the state where Arnold Schwarzenegger is the Governator, so you should probably take all of my political ramblings with a big grain of salt. (No, I did not vote for him, either.)

Think you can persuade him looking into the tango world and work on some gancho/colgada series.

And who is this Bush guy again? I am so far lost in the tango world, that the only things I notice are the gas price has done up more than 100% and our business has gone down 2/3 the last five years.

The tango world has more fun than the real world.

I would think that the learning curve for being a tango-oriented cartoonist would be even harder than a political one.

Don't worry about not knowing who "that Bush guy" is. He'll be gone in January anyway. Just keep dancing.

I don't know what gas is going for these days in the Big Apple, but I just saw $4.39 for premium just yesterday. Amazing, huh?

Troubletown has long been a favorite of mine. It's actually one of the tamer comix that I like.

I should introduce you to George and Mike Kuchar sometime.

The cartoon Museum is a cool place. Did you see the Edward Corey "Dracula" exhibit when it was there in December?

I didn't see that show, unfortunately. But I bet it was super fun!

I think Troubletown is one of the funniest comics around today. I wish Lloyd had a huge circulation, but at least his fans are ravenous.

Very smart and talented guy, he is.

Wow! You have been having your brushes with the art world - how much fun! xoxox