Flamenco Night and My New Boyfriends 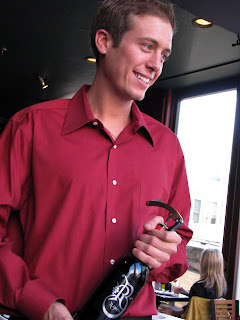 I have two new boyfriends. Technically, I guess you would call them crushes because they probably don't know that they are my boyfriends. Well, the first one might. Let's take this one at a time...

My Flamenco friend E. and I decided to go here for dinner last night before we went to see the Flamenco performance at Peña Pachamama.

We were greeted and seated by Mattin, who told us that usually he works in the kitchen but tonight was his first night waiting tables. My friend and I automatically congratulated him on his "promotion" and it wasn't until a few minutes into the conversation that Mattin let slide that he owns the restaurant. And has worked very hard day and night since he came here five years ago from the Basque country. He pointed shyly but proudly behind him to the flag over the kitchen: "That's my flag." 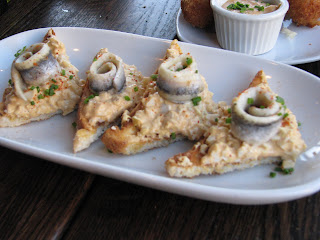 Not only is Mattin extremely boyish and charming, but he has the most adorable accent ever (my friend and I were instantly smitten with him). We asked him to order for us, and we shared a lovely spread of a variety of tapas: Baby Shrimp and Potato Croquettes with Aioli (crunchy crispy outside and heavenly creamy inside); Seared Tuna with Bleu de Basque Sauce (the sauce is to DIE for); Egg Mimosa with Anchovies Toast (a light egg salad topped by pickled anchovy fillets--YUM!); Mache Salad with Feta and Walnuts and Stuffed Calamaries with Ink Sauce over Spanish Rice. This last dish--OMG--the rice was out of this world. 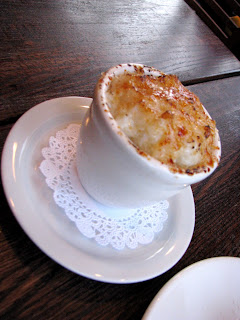 Mattin chose a nice bottle of Rioja for us to go with our meal, and he came over often enough so that we were able to grill him on his family, how he came to open a restaurant in San Francisco and why he loves what he does. He showed us pictures of himself when he was 10 years old--he's been in the restaurant business for that long! Anyway, we were looking for excuses to have him chat with us. We were unabashedly enchanted by him. I have a feeling we are not the only ones.

And then it was time for dessert. Mattin told us that he started working at 10am that morning on his special rice pudding and it was "still warm" so of course we had to order that. But we also got the yummy warm chocolate cake that I can't remember the name of. Both desserts disappeared in minutes. 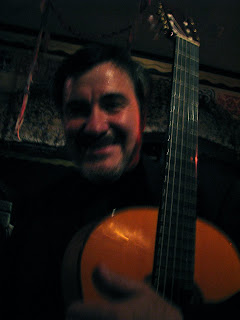 We probably would have stayed all night and kept ordering food if we didn't have prior plans to meet some friends across the street, which leads me to Boyfriend #2.

Boyfriend #2 is Jorge, the guitarist from my Flamenco class. In class, Jorge is sitting quietly in the corner, playing for us while we limp and struggle through our beginner's exercises and routines.

But tonight, here he was, dressed and polished in black with a grey blazer, and he was the muscial star of the show. The talent that I knew he must have from the snippets I've seen in class were blazing mightily on the little stage at Peña Pachamama. 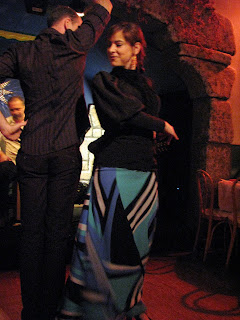 Accompanied by singer Azriel El Moreno, the dancers Carola Zertuche and Roberto Aguilar made the floors shake with their rhythmic percussive steps. Flamenco is so in-your-face, and I love it. The dancers were sweaty and strutting. Some of Carola's hair clips went flying as she twirled but it seemed like a natural part of the excitement her dance. Even her hair could not be contained.

At the end of the performance, Jorge came over to talk to me and my friends. I think he was glad to see us outside of the classroom setting, so we could see what his passion was all about.

He was holding his guitar like it was a beloved child and his face glowed when he talked about his music and how much he loves to play his guitar, for hours and hours at time if he can. He talked about his touring and who he's played with, and all the while sounded like a guy who was head over heels in love with a beautiful girl. But the girl happened to be the guitar he was holding so close.

I could not help but want to catch that moment of his happiness, which he kindly obliged.

Being around talented people who love what they do is such a wonderful gift.

Posted by tangobaby at 4:12 PM

The way you describe Jorge and his guitar reminds me of B.B. King and his Lucille. I have seen B.B twice, and I swear, that man loves his guitar the way that Jeffrey loves me.

I find the way people become attached to things fascinating. I guess that's why so many of us love old things; for the stories these cherished objects hold. I would love to hear a collection of essays/stories by people about their passions and the things that connect them to those passions. It would make a cool NPR project wouldn't it?

Can I come over and share your boyfriends with you? :-)

Delicious! And the food looks good too.

oh my dear, you brought me back to europe with your fanciful yarn. and i don't think he could be any cuter...i'm a sucker for those elegant euro men.

Matiin could make me eat squid too ;P

Oh oh oh oh oh - you lucky woman! Sounds like a perfect evening. Let's go to that restaurant when I come over. I can practice my Spanish although he probably speaks Catalan. :) xoxox

Hola Paris Parfait,
Since he is from the Basque Area of Spain, I assume not the French side, he would speak Basque which is actually nothing like Spanish, Castellano or Catalan at all :)
But most likely he would speak some dialect of Castellano as well.

why, why, why didn't i ditch my parents and come join you as i'd originally planned?? i'm so jealous {but very happy for you too of course!}. i need new boyfriends in the worst way. we must go visit our italians at a.g. ferrari & try to rekindle. or maybe even go find some new ones too. you're so much fun to go flirting with tangobaby! ;o)

I am just too sleepy today and having Monday blues to write back to all of you individually, so please accept my love and a sort-of-silly group response.

Mattin is French Basque, so now you know how insanely cute his accent is. He is from Biarritz, which I did not realize is in Basque country, and he assured me is.

Due to the overwhelming response to my post, I think E. and I are definitely going back soon, and it's very possible that Mattin will be a regular part of my eating and flirting life.

I also think we are arranging field trips to his restaurant, so when you're in town and you want to gaze on cuteness and eat something, let me know.

In the meantime, I'll be scouting out more boyfriends for all of us. Ms. Wellspring and I have some saved up in the Castro for you, too.

What a fabulous evening - and a fabulous post!
I'm glad to hear you got safely back home and can't wait to see pics of your trip!!

Right now it's your adventures that are so exciting. I loved your photos of Urugay.

My trip right now exists only in my daydreams and in watching that little video over and over again and singing the song.

But soon enough there will be an adventure in my future. I can feel it coming.

cute the boyfreind.I love your blog
do you want to share link with me ?
have a look to my french art@fashion blog.