Relyn was kind enough to share a little bit of her commute with me, so I thought it would be fun to return the favor...

So here is the exciting world of tangobaby's daily trek: 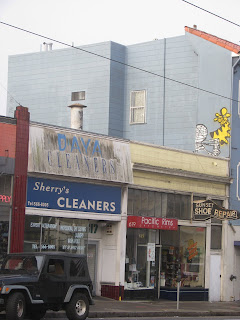 This is where I wait for the train in the morning. It's Muni's N-Judah line and it goes all the way from the ocean to the ballpark. Part of the time the train travels above ground and then it goes underground for a few stops, too. I have a pass that costs $45 a month, but lots of homeless guys ride for free. 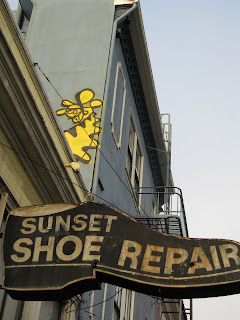 I like this old sign, and I always wonder how the graffiti got up there! It's just not San Francisco if there isn't graffiti somewhere. 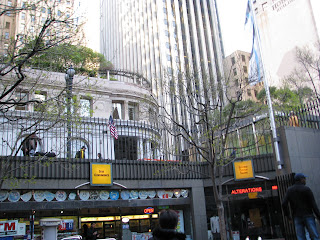 This is where I get on and off: Montgomery Station. This is coming up from underground. 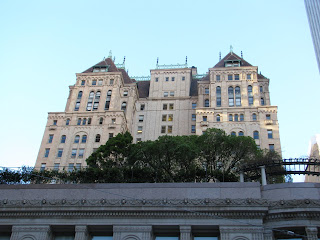 This building is one of the ones I like to look at. It's much more impressive in person. 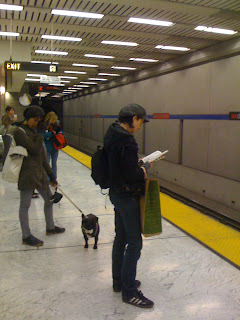 This is actually a little detour. I had a flamenco class tonight, so now I'm coming back from Civic Center Station. It happens to be a creepier station than the others, imho. 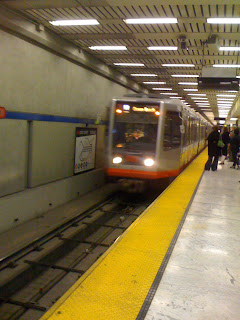 Here comes my train! Hooray, it's not packed like a can of sardines tonight! 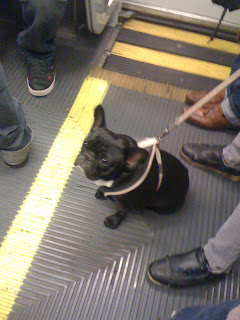 This pup licked the bandaid on the back of my heel after I took this photo. It was very nice of him to think of me. 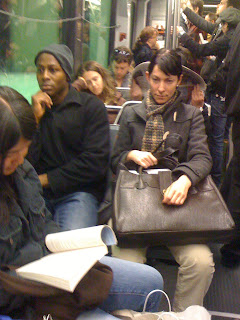 Look at all the happy faces on the people. 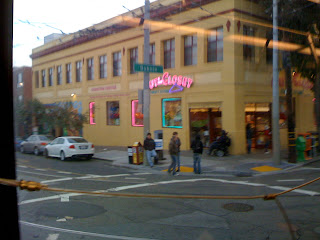 This place is a second-hand clothing store in the Castro, aptly named Out of the Closet. They always have fabulous window displays, as you might imagine. 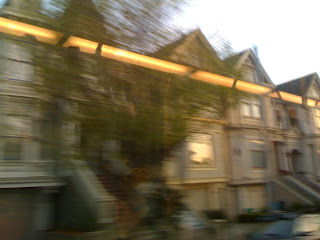 Now here is the fun part. For the second time in a week, the N-Judah has stopped at Hillview and has to turn around. So we are getting kicked off the train and I have to walk the rest of the way. Why? Who the hell knows. 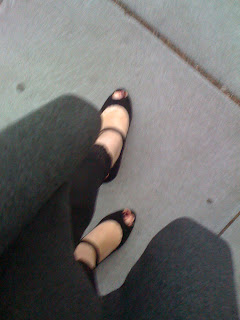 So here I am walking the Streets of San Francisco. Funny, wasn't that a TV show? 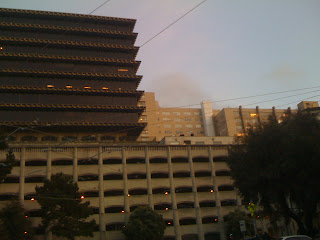 Here is UCSF Medical Center. It is a very acclaimed hospital and teaching facility. Let's hope none of us ever need to go there. 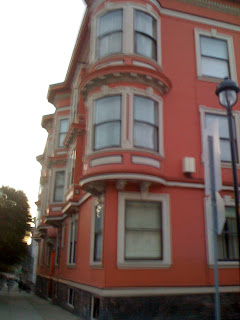 Just a random building. I think this is on 4th and Irving. I like the color. 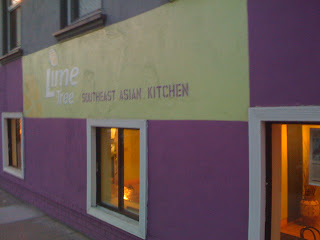 This is a very nice little hole-in-the-wall place called the Lime Tree that serves Singaporean/Indonesian/Malaysian food. The owner's name is Ming and he is just the sweetest man. They make this black jasmine rice pudding with coconut milk that is TO DIE FOR. 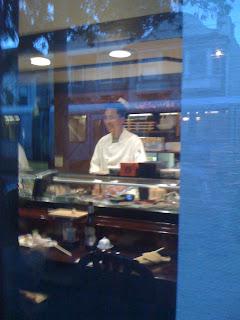 This is a Michelin-starred sushi restaurant called Koo. It's not my favorite (I'm an Ebisu gal) and you definitely need a reservation. But some people rave about this place. 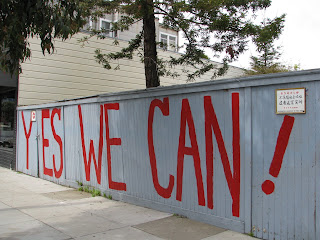 In case you didn't know, San Francisco is Obama's town. I live in Obama-land. If he doesn't win the nomination and then the presidency, I think a lot of San Franciscans are going to seriously flip out. Or move to Canada. 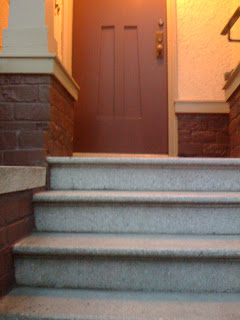 Posted by tangobaby at 9:41 PM

Oh, how funny--I was thinking the other day of proposing a "picture your day" exchange. I'll do one for tomorrow!

That is the coolest post! If I didn't work from home I would totally do this. x

Now, I want to go back to San Francisco. I haven't been there in ever so long. :-\

You had me every step of the way until the brussel's sprouts. Lovely post and great shoes!

i love this kind of stuff. i'm glad you got a camera.

oh what fun! since our commutes are so similar i will pull out my camera to add the extra bits that are in mine and my own fave things to look at along the way. this is a great idea for a photo essay exchange!
p.s. did you get to have artichokes recently too? yummm yummmm!

Love the little French Bulldog on the train.

hi! i'm revisiting your blog after finding it randomly. i love that you write about dance and tango and san francisco. it's wonderful to step into another dancer's thoughts.
i can't wait to visit california again.

very cool, will have to include it in Link Roundup on the blog..

I can't wait to see what you come up with! You should do a restaurant crawl (with me)!

Maybe you can take a walk around the block for us? That would be fun. You must go out sometime!

Never in a million years would I have told you I like Brussels sprouts until I found this recipe. If you try it, I promise they will be your new favorite vegetable. Plus, it is the easiest thing in the world. I'll put the recipe at the bottom so other people can find it too.

The shoes are my Christian Laboutin knock-offs, courtesy of Nine West and Ms. Wellspring being a trendsetter. I also have them in red!

Oh, there's a zillion more photos where these came from. I am worried that flickr is going to cut me off someday. Lots different than Shedville, huh?

You should definitely do your own trek. I think people will be impressed to see that hill you have to climb up! But your view is worth it.

We did have the artichokes. I loved mine, The Boy decided it was not his favorite vegetable. Thanks for the recommendation.

I'm glad you liked the post, too. I always feel bad for the little pooches on Muni. It must be scary for them. This guy was very brave.

Welcome and thanks for visiting and leaving a comment. There's lots of tango in SF so we'll look forward to your visits anytime.

Thanks for the shoutout. I'm glad you stopped by. Someday I figure I'm bound to bump into you on the N.

Get a bunch of Brussels sprouts. (I don't know how many! You decide)

Wash them, cut off the yucky ends, and cut them in half.

In a large frying pan (I mean large), melt a chunk of butter until it gets foamy over medium heat. Be brave, the more butter, the better.

Throw in a teaspoon (or more) of chopped garlic. You can use the jarred kind, the little frozen cubes, or fresh. Stir the garlic in the butter, but not to saute.

Add the halves of Brussels sprouts FACE SIDE down in the pan. They should all touch the bottom of the pan (that's why you need a large one).

Turn heat down to med-low, cover the pan and walk away. Check back in 15 minutes.

The sprouts should be browned/slightly crispy and soft. You can season them with salt and a little bit of Parmesan cheese, but I don't even bother with the cheese anymore.

I promise you that you will love them! I never thought the words "love" and "Brussels sprouts" would go together, but they do if you make them my way.

Oh thank you for all these great photos of my old neighbourhood. But you can't force me to eat Brussel sprouts, no matter how you gussy them up! xo

Oh TB. You know what you've done, don't you? You've set the wheels in motion. And that's always dangerous....

I must be part of a minuscule underground minority that actually likes brussel sprouts. Your way sounds yummy. Another way is to steam them for a bit to tenderize them, then put them in a roasting pan, toss with olive oil, salt, pepper and dill, and toss in the oven to broil (covered) for about 15 minutes. Uncover for about 5 more to get them crispy on the outside, creamy on the inside.

The rest of you can now resume reading.

Every time I take a picture in *our* neighborhood now, I think of you first and I always hope the photo makes you smile.

Don't worry, I won't bother to try to convert you to sproutdom while you are here. There are too many other things we have to eat!

Johanna, your comment is yet another reason why I love you. We are Sprout Sisters. We don't always have to talk about chocolate.

I think your way and my way might almost achieve the same effect. I am going to try your recipe for sure! People who don't try Brussel sprouts don't know what they are missing, huh?!

TB, I don't want to hijack this commute post into a sprout post. But one of the most satisfying culinary experiences I have is the look on the face of until-now sprout haters who taste my sprouts :-)

I know, I know. You're preaching to the choir here.

Great post. I'm glad you took us with you on your commute. I wish I'd ended at my front door, too. That was a great finale. I love that this idea seems to resonate. Wouldn't it be cool to see the common every day moments in the lives of people from all over the map?

I'm with dutchbaby, they are great shoes. How like you to tell us exactly who makes them. You have such a generous spirit.

How 'bout taking us to a flea market next time?

I love your shoes!! And I love brussel sprouts!!

It's cute that the pup took care of your "wound". Dogs are so cute (cats too)...such truly unconditional love.

Brussels sprouts are the one food I don't eat. You will have to cure me of that.

A flea market? That's funny you mentioned it because I was just talking to a friend about going to a Saturday market. I'll keep it in mind.

For Katie and Relyn and anyone else who is interested: The shoes are by Nine West and they came out last fall. Here's the style, maybe you can still get a pair!

Yes, I felt very grateful to the pup, considering how it must not be very fun to be so short and be on the dirty floor like that.

Brussels sprouts are great...now you have the recipe so go for it! (And Johanna gave you hers too, so there's no excuse!)

Here from the N-judah / Yes we can link...
I'll have to try your sprouts recipe! I've made them with bacon several times, and with butter, olive oil, and pepper a few times. Yum! :D