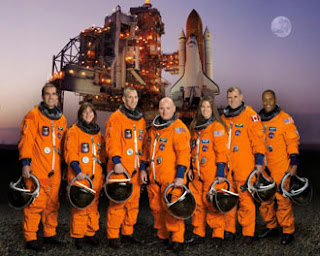 While it didn't make front page news yesterday, at 6:36pm EST, the space shuttle Endeavour had a successful lift off from Launch Pad 39A at Kennedy Space Center. What I didn't know about this mission is that we have now our second teacher in space.

From NASA's website: STS-118: Build the Station. Build the Future.

Twenty-two years after first being selected as Christa McAuliffe’s backup in the Teacher in Space Project, Barbara Morgan will strap into space shuttle Endeavour as a fully-trained astronaut. She is one of five mission specialists in the seven-member crew.

Many of us remember where we were and what we were doing when we heard about the space shuttle Challenger and the tragic loss of its entire crew. I was on my way to school, listening to the radio when the report came in. I cried in the car. Even though the news was sketchy, you just knew in your heart that there would be no survivors. There had been such excitement for that mission because our first teacher, a role model for children (and adults), would accompany the crew into space. Our nation's heart was broken for a time.

When I hear about these shuttle missions, I feel such respect and admiration for the men and women who devote themselves to exploring the boundaries of our world on our behalf. They are our emissaries into the future.

You can keep up with all of NASA's missions and even see the crew aboard the space shuttle on NASA TV. Sometimes I like to listen to the audio and pretend I'm helping out in Mission Control.

Posted by tangobaby at 9:17 AM