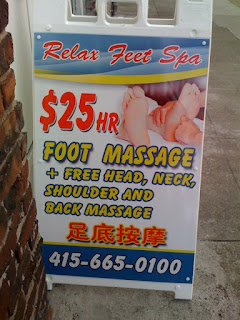 To be fair, he paid another guy the same to be pummeled from head to toe.

We went to the Relax Feet Spa. (Actually I'm playing with you. They didn't beat us up. It only felt that way. Sometimes. Sometimes I liked it.)

Actually, I'm still playing with you. Mostly I liked it except for the few times where I thought I might have a fractured bone and had very bad thoughts about the man who was wreaking havoc with my entire nervous system. I did check the following day to see if I was covered in bruises and I wasn't.

This little reflexology foot massage place is a few blocks from our house. I had passed it several times on errands and took this photo with my phone. I was so excited to see this place, meaning that I didn't need to go to Chinatown for this particular brand of exquisite torture. I have a feeling that reflexology massages like this have some sort of healthy outcome, if not solely for you being super grateful when they are over with. I do want to think that other modalities of health care have merit even if we Westerners don't understand them because we only go to doctors once something is messed up. We don't go to them to prevent illness.

(On a somewhat tangential side note, I don't know about you but I keep getting a lot of emails from Barack Obama and friends about last-minute lobbying for the health care public option. You might notice that I have stopped entirely cold turkey about blogging about politics since the election. I have given up. I now think both parties are totally useless. But I digress...)

When we walked in, a young girl handed us a laminated menu with several exotic selections for our foot baths. We both chose the Chinese Medicine bath. Not only did we get foot baths and foot and leg massages, but that $25 entitled us to entire body massages. The man beating The Boy was the one in charge. He pointed at The Boy after our massages and said bluntly, "Too fat." To which we both stood silently, with big eyes. I did not tell the massage man that we had a grocery bag full of melting ice cream, a big bag of marshmallows for cocoa, and some other things that aren't super healthy.

He kept repeating it. "Too fat. Too fat." We nodded to say we understood. "Broccoli," he added. "Good poopy. Broccoli." And then preceded to trace imaginary veins up his forearms. I'm not sure exactly what that signified, but it wasn't looking good. Anyway, we'd managed to make some small talk with him ("Charlie") just because, in his direct and concerned way, despite the beatings, we liked him. He was sincere and so hard working. He told us he came from Peking (he said distinctly Peking and not Beijing, which I thought was interesting). He had lived in Alaska and Minnesota and Southern California, working in Chinese restaurants wherever he went. Now he was "too old" to work in a restaurant, so that is what brought him to San Francisco.

Despite the language barrier, it was obvious that he wanted us to be healthy. Despite the feeling that we had been punished for transgressing the physical needs of our bodies, we got a golden VIP Card so we can go back to Charlie and his silent buddy Michael for more pummeling. Perhaps they'll help us get healthier, who knows. At least they care more than the people in Washington DC about that sort of thing.

Posted by tangobaby at 7:22 PM

I must throw those marshmellows away. $25 for a massage is a wonderful price for being pummeled.

ooh another little piece of alaska in SF! : )
i've only heard that SF is expensive but 25 bucks for a pummel? WOW! thats a good deal! we need more Charlies in this world (and more tangobabies). : )

Julie-this is why I love you and love reading your blog!!!

I've long since given up on both parties. There is no difference between either of them. They're both, sadly, the same and neither one gives a hoot about us.

On a funny note, word verification is:
Sly spa

$25 - fabulous - but he would need therapy after seeing my fat!

I think I'm going to check that place out. I'm ready for a good foot massage. I'm with you on the politics; I was always a bit more analytical than some about Obama and how much change he could accomplish but I did think he would be a more positive force for progressive change. I suppose there's still time but it's hard not to be cynical.
However, we still have broccoli! LOL!

"Broccoli. Good poopy." Still laughing my ass off. And $25 for a good pummelling sounds right up my alley ~ too bad I'm on the wrong coast. Great post. And I finally got fed up and unsubscribed to that Obama nonsense months ago. Pleh.

I just put Broccoli on my shopping list...
Great story!

There is a similar-sounding foot/body pummeling place near my house. My entire book club's already been. I must check it out. Do you think deep-fried tempura broccoli will still make good poopy?