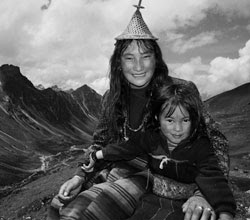 Thanks to my talented art blogging friend, NamasteNancy, I know where I'll be spending part of my Sunday.

The Asian Art Museum just opened an exhibit about the Kingdom of Bhutan, and today there is a free film festival that highlights the artists and general philosophy of this small and unique nation.

I've watched Frank Capra's 1937 film Lost Horizon several times over the years, and up until recently did not realize that the Shangri-la of James Hilton's famous story may have been based on this tiny country.

Later on, after discovering Michael Palin's stupendously fantastic BBC series, Himalaya (get this or rent it, it's completely fascinating and probably my favorite armchair travel set ever), I became enamoured of the idea of a real country where the people (and their government) have a stated goal that the happiness of its people are of primary importance: Gross National Happiness. Bhutan has made great conscious efforts to preserve its culture and identity and natural resources.

I wonder if our country will ever be able to take a quantum leap in heart like this tiny kingdom.

***
There is another wonderful movie called Travellers and Magicians, made by a Bhutanese director, Dzongsar Jamyang Khyentse Rinpoche who is also a Tibetan lama. This director also made an earlier (and the first Bhutanese film), The Cup, but Travellers and Magicians really shows the beauty and philosophy of the country and was the first feature film shot entirely in Bhutan. I enjoyed it very much.

Posted by tangobaby at 6:25 AM

Did you see the new king's beautiful shoes last fall? Gorgeous. So is the king...they really are a beautiful people, inside and out.

The Cup is one of my favorite films and now I learn (from you) that the director has another film out. I'm off to add it to my Netflix list. The ending of The Cup is something that I almost have memorized - so powerful, wise and compassionate.

My husband loves Bhutan. Thanks for the film list. Now I know what to find for him for a gift or two.

My mom and Stephen visited Bhutan last year--her first visit, Stephen's had many. I do hope they get in touch with you for your book...I will keep encouraging them to do so :)

Folks, try this film too. The Other Final:

It is wonderful. Watching it was the first time I heard about Gross National Happiness. Bhutan rules!

And I'll be trying the other films mentioned, if I can get them in Argentina!

Can I pester you to send me a postcard from the Museum? I just would love to go to the exibit and I can't right now. If you remember...that is all.

I will definitely check them out as the book and the movie are both so very beautiful to me.

I feel jealous of the free films festival. It takes me back to Havana and its Latin American Film Festival in December each year when you can watch hundreds of film for very little money.