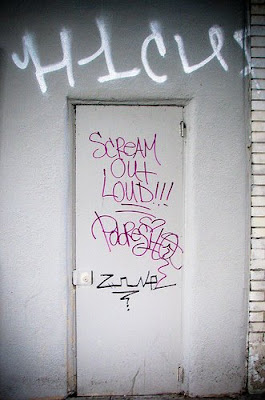 you feel that way sometimes
I wasn't even going to write a post today (it's Monday, and there's a stressful vibey thing going through the office... more closed door meetings, ugh) and then a little rolling tremble rumbled under our feet.

We're so tired or blah or whatever that we all look at each other and say, Was that an earthquake? (We're on the 9th floor.)

Or was that a truck?

It did end up being a earthquake south of here, rolling all the way up to the city and under our Aeron chairs, but maybe we needed a little jolt today.

***
Last night I went out tango dancing for a while but the jolt I needed there was missing so I left early. Another off vibe but that's just how it is sometimes. 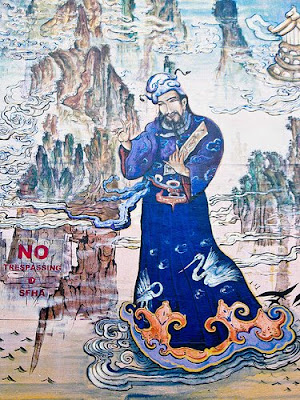 The wise man says "No Trespassing."
Since it was almost dusk, I decided to catch some last shots in Chinatown before heading home. It's such a different place when the tourists are gone and the shops are closed. 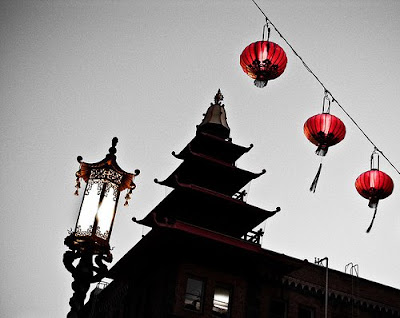 Got some interesting photos of lights and lanterns. 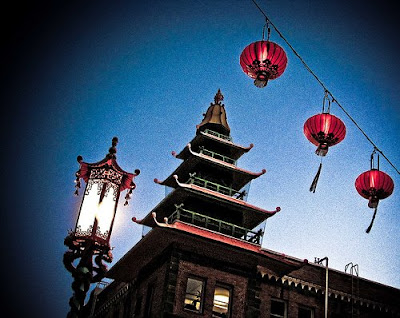 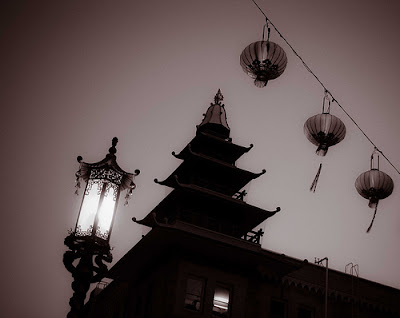 And as the new moon rose over Chinatown last night, a perfect thin sliver of white, I couldn't help but notice how thinly divided we are in this city. 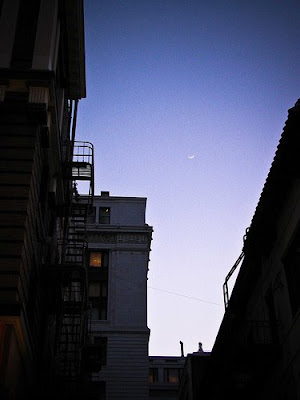 The building immediately in front, with the fire escapes, is a typical aging Chinatown storefront, selling cheap bric-a-brac, the same stuff sold in every touristy shop up and down Grant Street. The building behind it is the back of the Ritz-Carleton Hotel, one of the most expensive hotels in the city.

As I'm taking this photo, a little voice says behind me, good morning, help.

She is wrinkled, with a face like an apple doll and hunched over a cane. I can hardly make out her English. Good morning, help. 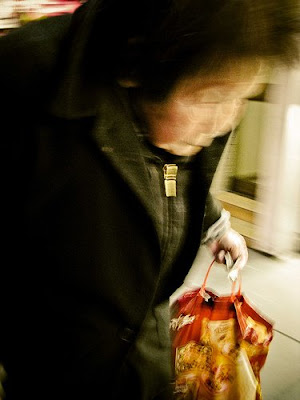 Then she says, I'm hungry. That I understand.

I had a dollar in my coat pocket. That's all I had but at least I know in Chinatown she can get something to eat for a dollar.

Some days I do get weary here. Don't get me wrong. This place isn't a postcard. It's like Kathryn described in her piece in i live here: SF. I can see what happens here. But there's enough beauty to make it worthwhile.

Thanks to Kathryn's blog, I found this wonderful video: "San Francisco" by Jill Sobule. I think I've watched this at least ten times already. It makes me misty eyed. This song makes me realize why I live here and love it even when I'm weary.

She shuts the door behind me, waits for me to get undressed
She ask if I need water, I can barely understand her
I think she asked me what I do and I said that I'm a singer
She laughs and claps her hands
And then she begins
And she sings:

She looks just like a sparrow, but she's strong just like a wrestler
She kneads and pulls and climbs on top
It hurts, but I will try to take it
Ask her if she's ever been
Been to San Francisco
She tells me that she can't leave
They won't let her leave
She sings:

And in Golden Gate Park
[ Jill Sobule Lyrics are found on www.songlyrics.com ]
She'll throw a Frisbee
She'll bring a dog
And she'll meet a boy
And they'll fall in love
And she'll feel so free
Still walk on his back

Wonder 'bout the place I'm in and how they treat the girls
I know that it's legitimate
But still it makes me wonder
She gets up to leave
And I put back on my clothes
I tip her well, she bows to me
I really hope one day she gets to go

That lady in Chinatown made my gut hurt. I am hoping she bought something to eat with that money.

I have been sending you love all afternoon. I will email more.

You are so generous and you have such a beautiful heart. I'm sorry you are having a bad day.
xo

With every post and every photo you add another layer of richness and joy to my life. I can't imagine a day where I don't immediately turn to your blog when I turn on the computer and always find something amazing written there.

You made me think of the rather elegant woman who asked me for help one day on a busy street in Seattle. Her minimal social security was not enough to make it through the month. Whether it was true or not, I felt badly for her that she had to beg. I've heard there are many elderly people who are in this situation.

I cannot think of you as ever meriting a bad day. Let me adjust your vertical hold from waaaay over here in Grass Valley where it's warm and breezy and the Canadian geese are quackeracking away!

The photo of the building made me think of Tom Waits

I wondered how this same Moon outside over this Chinatown Fair

Could look down on Illinois and find you there.

oh! Tango---baby! Those shots of chinatown...lights and lanterns are drop dead! woooooow...

oh!!! I LOVE Jill Sobule. I knew I loved her when she opened a show for my friend and the title of her first song was "f*ck". LOL listen to the song titled "Mexican Wrestler".

anyway - sorry about the tense vibe at work - glad you're ok. Beautiful shots from a beautiful soul.

I was looking at the new moon in our backyard night before last and thinking that's the same moon we're all seeing... and isn't it lovely.

Sorry you had a bad day. As always, your posts make my day.

I am filled with tears. The lyrics break me.

I hope to see S.F with you. I would adore that.

These pictures are stunning!

I love the 2nd one down of the lanterns. The colour is amazing. I remember those closed door meetings too when I worked for the bank. We'd all look at each other with a knowing look on our faces, it usually indicated drastic changes. Changes that lasted a week before they changed it to something else ;-)

i wish i could cheer you up or make you laugh or take you to lunch or all of the above, dear tangobaby. here's hoping the next tremor shakes things back into alignment. whatever that alignment may be...

Thank you so much for such great shots of my favorite US city! Since I don't live there anymore and can't get there as often as I'd like, I have to go vicariously! And I can't thank you enough for the opportunity!! Remember that the bad days only make the good days even better!

As hard as I feel it is getting for me, this makes me realize I'm not there yet. We shouldn't have hungry people in this country. It's not right. Your blog is provoking, which makes it a draw for me and a dilemma. I do come back though.

Superb! I wish you life and light and love and peace...in San Francisco

Even weary, nervous, and slightly off-kilter you are generous, warm, and loving. That's why we all love you so much.