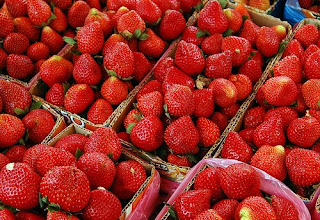 Anna was left a young widow with four small children when her husband Nathan died. His death certificate says that he died of pneumonia, worsened by a cardiac condition, but the family rumor had it that his death might have been from complications resulting from when he had been shot while trying to smuggle weapons into Russia after the Revolution.

Whatever the story was, Anna, or Annie as she was also called, was a young widow in Brooklyn, left to raise four small children in a brownstone tenement. The year was 1924.

***
Anna was my paternal great-grandmother. Nathan had supported the family comfortably as a furrier. After his death, Anna opened a beauty parlor. She also made bootleg whiskey in her bathtub and delivered it to her customers in a baby carriage. My Aunt Edna's baby carriage.

Great Aunt Edna had fond memories of her mother, that she was impulsive and good-natured, despite their constant struggles to make ends meet. When Anna would come upon a little windfall of money (maybe from the whiskey or a generous tip from a customer), my great aunt remembers that her mother would go out and buy a treat for the family. She remembers the strawberries vividly, an expensive luxury but how cherished those berries were and how special it was to have them.

I have always enjoyed imagining those strawberries, and the family of children delighting in them. Whenever I have a little windfall, I call it my Strawberry Money.

***
Yesterday I wrote that post about how Dickensian the world has been feeling and about not having money for a sandwich and all of that. I literally pondered if there would be a treat after all of this economic madness.

But when I got home, there was some Strawberry Money waiting for me. A check for $29 from Blurb, meaning that more than one person actually bought one of my books online, so I could accrue enough to get a little check in the mail! Hooray! Thank you, mystery customers!

What would you do? When you ask for a little treat, you might just get one!

Posted by tangobaby at 9:34 AM

Dearest Tangobaby - I think that we will get by by creativity, courage and communications. I read Friedan's column the other day and while I have my issues with him - he's the guy who was all excited about globalization without thinking through the cost - I think that what he leaves out is the creativity of the "little" people, the strength of our families (chosen or otherwise) and our need to create more and consume less. You are already on the right road and a leader for those of us who follow your blog. I think that most of American is still waking up from the last decade of greed and corruption; once they start grappling with reality, I am hopeful that people will come up with a lot of good solutions.
In the meantime, let them eat strawberries!

I can relate to Anna. Whenever I get a little extra money, it goes to special food treats. Usually some Gouda for Sean and raspberries for Buju.

If I were you I would get some strawberries and make a custard tart. Then gather some friends for a moonlit snack by the water.

Extra money is the path of two choices: Save or Spend. If I had your windfall I'd probably buy some art supplies - that way the money would keep on giving.

i see a vanity fair on the horizon...with pretty pictures of obama and co...

i love the term "strawberry money"

when i was growing up, we called hundred dollar bills "crispy critters." not really the same, but a little family story nonetheless...

WV is prooff is that like extra proof that your books are fabulous? by the way, i ordered the mission one on blurb around christmas. do they take that long to pay you?

I love strawberry money, how pretty! A splurge right now would include chocolate or chocolate.

A book or two, a bottle of cheap but decent wine, a little nice chocolate and being behind a locked door. I am feeling a bit selfish it seems today.

Those beautiful strawberries pictured above have set my mouth to watering. Baking walnut strawberry bread and having a little strawberry butter to go with.

You were right you're windfall has given my boys an after school treat.

A bottle of sparkling wine shared with a loved one, and, of course, some strawberries in the wine glasses....with a special toast to Anna!

I loved reading about Anna... doesn't it seem that people were more resilent back then?

If I had some strawberry money, either a book or The Body Shop :-)

What a beautiful recollection, so artfully crafted. It's strawberry money for those of us who read you.

Our families probably lived near each other in Brooklyn, having come across on the same ships from Russia. The detail of the baby carriage launches this post into the realm of precious, great memoir....

Here is where I tasted the best strawberries in all my years, deep purple-red in color, bursting with flavor, even better because you picked them yourself while the juice was still warm from the sun:

henceforth my extra money shall be called strawberry money too! I love that.

today my strawberry money was spent on flowers, a hat and a scarf.

If I had "strawberry money" It would spent on be nail polish. I have recently had a baby and I love to leave him with his dad for a hour, lock myself in the bedroom and paint my nails. With all the stress and mess that comes with motherhood it reminds me that I am more than a mother and a wife. I am a woman.

This is a beautiful story of your Great Aunt Edna's wonderful memories of her mother Anna, "impulsive and good-natured," despite their hardships. My own beloved Tante Helga (Tante is Aunt in German) was like that too, before she passed away a few years ago. She had kidney disease and had to go to dialysis several times a week, yet she was always cheerful and happy and making everyone else happy. I loved my visits to Germany, and I loved staying at her apartment. Your mention of "strawberry money" especially reminded me of her -- once while I was visiting, she came back from her dialysis and we went bike riding to the fields to pick strawberries. The strawberries then made the topping to "Kaffee und Kuchen" (coffee and cake), which, along with the Biergarten, are German staples for a good time with friends and family.

On rare occasions for no special reason my two son's father would hand over a $5,or $10 bill to the boys and with New York bravado tell them it was "ball gum money"! I am a great believer in treats whether they be strawberry or ball gum...treats are good!

Thank you for the beautiful story. This is my strawberry money.

What a great story! I love calling it strawberry money! Congrats on the sale!

Hi Tangobaby,
This is cool, especially because it is part of the fabric of YOU!
May your life's adventure hold much Strawberry Money and fond memories of the strong woman that have gone before you!!
xox
Constance

Cookies! I would buy you and I, warm chocolate chip cookies. We could save the change, in case we saw a street musician that played along the lines of, Jose Feliciano.

Beautifully and elegantly written post. From the outset when you gave us the reference that developed into the 'Strawberry Money' concept, you had me hooked. Many thanks for such an amusing post.

I would put it toward dance lessons. The local adult education has ballroom dancing classes starting soon. No partner necessary! :-)

Flowers, always. And next time, for you, they shall be strawberry-colored.

Loved the story. I would buy a book because then I would have a few hours of thrills and enjoyment.

My strawberry money usually goes towards guitar lessons with Fiddler...!

My strawberry money usually goes towards guitar lessons with Fiddler...!

I am not an envious person by nature, but I envy you. I live vicariously through your posts. You know those books you read where you feel so involved in the plot that it makes you feel better about your day-to-day average life? Well, you and your blog are that book to me. This comment isn't so much directed toward this specific post. I just feel like you are so creative and have passion unlike most. You are real. I like real. You inspire me to be MORE real. And by real, I mean to rid myself of all worldly negativity and standards, and just live without hesitation. Thank you : )

O! Congratulations on selling your bok. That is so very very exciting!

you are the consummate storyteller. the moment the scene opens i am hooked and want to have you read out loud to me.
i would use my strawberry money on getting my first set of moo cards. i would love to share some ice cream with a friend using the left overs.

My strawberry money would be spent on The Omnivore's Dilemma by Michael Pollan. Oh how I long for that book in hardback! Too many places only have paperback..

Mmmm...strawberry money.
Let's see...
I'd buy treats for the whole family to eat (sugary ones of course) and fresh cut flowers.

I love the baby carriage whisky smuggling story.
Oh man...this could be a movie.
xoxo

I would buy something decorative for my house. We have a store here called Homesense. It's a discount store. Margie and I always say that if you're feeling blue, find $20 and go to Homesense, you can buy a candle, a new dishtowel, a vase or a new mug and come home refreshed and happy.

I love the strawberry money story. When we're really roke I stop using Loonies (our $1.00 coin) and I save them to buy treats with. I actually end up spending less money because I often won't break a fiver to buy a small item because I don't want to have to save the Loonie ....

You know I don't think I mentioned this, but my great grandma and grandpa, Maria and Genardo Schiano (LoMorello)lived in a brownstone in Brooklyn (109 Nelson St.) for 70 years.

Congratulations on your strawberry money. : ) That's awesome. I would definitely get an italian ice with mine. Strawberry ice, maybe?

I forgot to tell you how much I was in love, with the beginning of this post. I recognized the names from an earlier post, right away.
xo

This so reminds me of my Grandma Selma. On our yearly visits to NY, knowing that we didn't have any in Mexico, she would go to the store and handpick the best cherries for us. She would serve what must have been two pounds of them in a giant bowl, all shiny and sparkling with water droplets.

I love this post, I love the story of Anna, and I love the term Strawberry Money. So much better than "Mad Money"