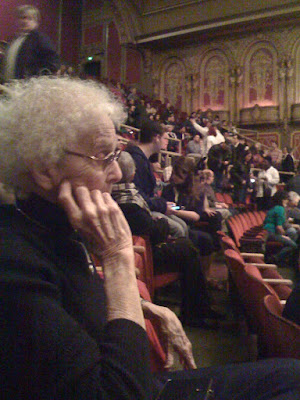 No kidding. This little grammy was sitting next to me tonight during the Tom Jones concert. I was worried what might happen to her when he started singing "Sexbomb." Tom doesn't just sing "What's New, Pussycat?" anymore. 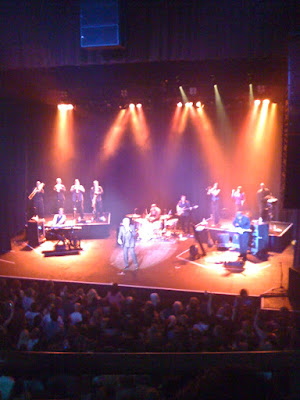 The concert was really fun. Cleavage was enthusiastically displayed even if it was a little older than one would wish to see so fully presented. The smell of pot was overwhelmed by the scent of perfume, not what you would normally expect in a crowd this size in San Francisco. There were a few interesting spectacles nearby: what possessed the 50-ish woman dressed as an ersatz cheerleader, ecstatically waving giant pink pompoms while he sang "She's a Lady"? Hmmm.

I stopped counting the panties after about 12 pairs. Not all of them hit the stage. There were three bras that made it, one of them hot pink and gigantic--the size of a small parachute. I worry a little bit that Tom will trip over the underwear lying about on the stage, but he's been dodging flying panties since the 60s so he's probably an expert at it. However, one tossed pair did hit him in the crotch, which was slightly rude and appropriate.

But we had a ball. He sang some new songs, which the crowd happily tolerated, but everyone was waiting for the oldies, and the sexy songs. Tom did not disappoint. At the end of the show, someone tossed a flag onto the stage, the flag of Wales, and you could tell he was quite charmed and happy about that. San Francisco loves Tom Jones. 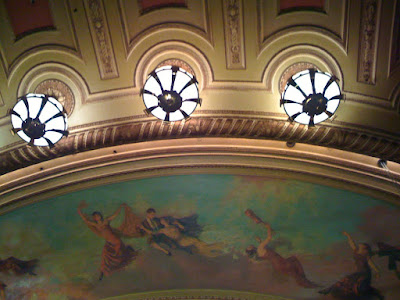 Also, the Warfield is a cool ass venue. Because I couldn't bring my camera, I could only use my iPhone to take these photos. But even so, you can tell that it's an architectural treasure. 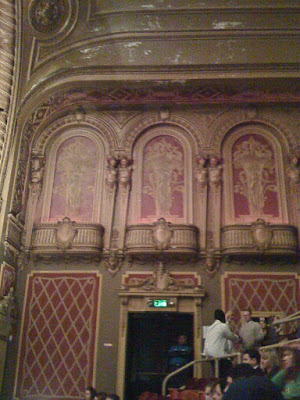 Okay, time for sleep. I think when I'm that little grammy's age, I'll still be listening to Tom Jones, bless his heart. He can make any girl feel young again. 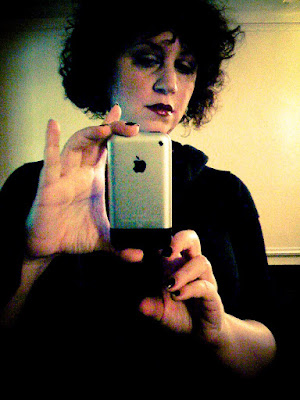 Tom Jones is like the energiser bunny, he just keeps going and going. The art work on the walls is beautiful, I love that kind of thing.

Have a great Sunday!!

i really love the old lady. she must have been a fan from the beginning! :-)

Love that one pair of panties hit at crotch level! Never been to a Tom Jones concert but knowing he's the ultimate entertainer, sounds like you got your money's worth.
Me, I'd have been studying the ceilings of the Warfield... what a place!

:) I so would have been at the concert with you. I can remember many Friday nights when my mom watched his show. She dug him. Plus I have his version of "Kiss" on my iPod...and I may have "The Green Green Grass of Home" which still makes me cry.

That little lady must have been the rocker in her day! Too funny...would love to have seen her expression when he started in on She's a Lady!

Sounds like you had a fabulous time! That building looks really cool.

Brendan, who is a die-hard Foo Fighters, Flogging Molly, and Pogues fan (very pirate-ish) doesn't understand this thing I have for Tom Jones. He laughs at me.

That concert would have been quite interesting. : ) BTW, love your perm!

Did you sneak a peak at Little Granny during "Sex bomb?" I'd bet anything she was groovin' right along, and probably singing, too!

Thanks for bringing those of us who couldn't be there along with you for the evening! I am going to check his concert schedule now...

What a fabulous review! I was thinking of you today when I went to the Farmer's Market which is right behind the Orpheum. I will never think of Tom Jones in quite the same way. Plus - UBER fabulous photo of a gorgeous babe at the end of this review. Now, who is THAT mystery lady photographed at the end of this funny post? Now, she's not only a lady but an extremely talented one.

I've always wondered. Do you bring an extra pair to throw, or do you actually throw the ones you came wearing? Seriously. I'm wondering. If it's the second option. How, exactly? OK, now I just got a picture in my mind.

Maybe T Jones is a phenom for women... I don't get it regarding him, never did.
Jones and Wayne Fignewton seem about the same. I also thought Vegas Elvis was a strange joke. Lounge lizards all.

Glad you had such fun! As for the old lady, she was closer to TJ's age and I think it's wonderful she was out and about. Too many old people just don't leave their homes at night.

P.S. I love Warfield. Have spent quite a few happy evenings there.