Will There Be a Treat After All of This? 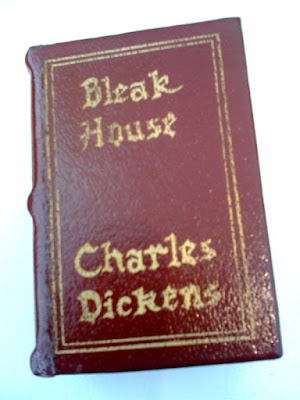 Yesterday, despite what else I may have mentioned, I also got a little treat. From my new book friend (who you'll meet soon), a small book-shaped box filled with Hershey's kisses. Totally unexpected and totally welcome.

And how did she know about my Dickens fetish? Somehow I must exude that. Bleak House, with its labyrinthine and gloomy descriptions of the Court of Chancery, is a favorite, as is Nicholas Nickleby and the heartbreaking tale of the relationship between Nicholas and poor Smike. Gosh, I cried my eyes out over the book and the original BBC stage production starring Roger Rees and David Threlfal. (It's eight hours of the purest, most memorable Dickensian experience you can have. And you can own it or rent it because it's on DVD.)

But my favorite story might be Little Dorrit. For some reason, reading about "the child of the place," a little girl who grew up in a debtor's prison and remained a lovely, innocent soul has always stayed with me. I know that Dickens based this character on his own experience as a child, having endured the misery and embarrassment of his father's own economic ruin that brought his own family to the Marshalsea prison. (On my one and only ever visit to London, that pilgrammage to the remains of the Marshalsea was a must-visit for me.)

Anyway, the concept of a dark Dickensian novel containing a sweet treat made me think. Times in general seem quite Dickensian of late. When I watched Slumdog Millionaire recently, I couldn't help thinking that it was an updated version of Oliver Twist, with those poor mudlarks trying to escape a world of cruel poverty.

Today, it's official. The giant Virgin megastore on the corner of Market and Stockton is going out of business. What's next? Barney's up the street? The new Ferrari store that just opened a few months ago? 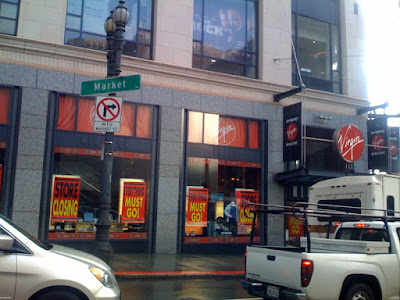 So many store fronts are closed downtown. More and more people unemployed. 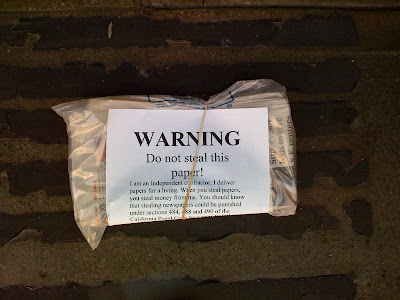 And this couldn't help catching my attention, not only for its dire warning about stealing and how the poor paper deliverer needs that income, but also because downtown they are giving away the Examiner for free, and the SF Chronicle may cease to exist very soon. Meaning that San Francisco will not have a "real" newspaper of note anymore.

I was eating a can of soup for lunch yesterday and feeling somewhat waifish about it. The fact that I have to decide if I can afford a sandwich just isn't something I thought I'd have to ever worry about. I guess I can say the Global Economic Crisis (or the GEC, as julochka calls it) will have a slimming effect on my waistline, but still... For a long time, I've not had a credit card, and just paid for what I needed or wanted from what I earned, but even that doesn't make me feel too much better.

It's like we all somehow entered the Global Marshalsea together, and I'm not sure how or when we're getting out. I just hope there's a reward for us somewhere, and not just that we survived.

ps.: after embezzling some lunch money, I just read Thomas Friedman's column today. Don't do that while you're eating your purloined lunch.

I have to battle paralyzing fear every day now. At a meeting yesterday, a friend said something about how we live in a brutal world now, and I said, not "now", it's been this way and has just become "now" for us. But your writing isn't brutal, your friendship is kind, and the people that fill the minute spaces between my palpitating heartbeats make this more of an adventure than some sick joke. It's all I can do some days to keep trudging...and look for the other world, the parallel planet of small wonders and love that seems to lay just on the other side of the wall I toss up in terror. One foot in the door and the other on the path......

I did hear about the chronicle recently. That really is too bad. Gavin Newsome said it has been running at a deficit for years. I hope it can be saved. Overall, I think everything is going to be ok, in the end. I've had 8 years of republican fearmongering, I'm not going to listen to them anymore. I shopped last night, granted, it was the sales aisle!

We'll all be rich in perspective!
And I consider your blog to be the reddish coals in the fireplace warming us all.

Bleak House is one of the Dickens I haven't read yet, although have heard a lot about. For some reason the Victorian literary giant would not be ideal for these times of grim and gloom, although revisiting the REASONS why we got into this mess first and foremost would probably be wise. Good post.

What a wonderful friend! Not only kisses, but CHOCOLATE kisses!
I'm going to have to check out the DVDs. We are movie hounds, but haven't seen those.
On your rounds about town, I hope you'll take a pic of Cafe Puccini and the little deli within a block of it to the left if you're facing the Cafe.
I feel very sad about businesses going out in SF. So many of these are touchstones for the city.

Hi Shabby Girl! I was JUST at Cafe Puccini to meet Kenneth for that photo shoot! I know exactly what deli you are talking about. It's wonderful. If you email me, I'll take a photo for you next time I'm in North Beach and email it to you. I do requests. ;-)

oh!!! I saw Slumdog this weekend and LOVED it. So very powerful.

I live in the other city across the bay, but I like coming over to the Mission to see what's up in Clarion alley (literally). Do you know Precita Eyes? They are responsible for many of the murals there. and Dave Eggers' place, 826 Valencia, is not far from there.

It's not enough that the Chronicle - even if it survives - is a shadow of its former self. But Virgin Records is going??!! How can that be?? Very dismaying news from home.

I have a guilty secret, I don't think that I have ever read a Dicken's book all of the way through. I do remember partially reading A Tale of Two Cities in one of my Uni modules, but when it came to exam time, I winged it despite not reading all of the book ;-)

It's very sad just how many businesses are closing. It's happening here in my little city in England too. Despite a huge shopping mall opening, there's closures everywhere around the city centre. And Dylan's Dad, is workplace are having more redundancies at the end of the month. It's difficult times.

You weave a beautiful 'story' and, although I don't live in SF, it's one of my favorite cities. Unfortunately, all of our cities are suffering with businesses and shops closing right and left. I've always felt America swings on its pendulum to extremes. Mark my word, in a very few years, we'll be known as the country that recycles the most, is in less debt, etc. than any other country. This swing is sure to be a good thing for us all.

A friend sent me the recent BBC production of Little Dorrit for my birthday. I've noticed that I've been sending more "little treats" too -- some to blog-friends who are having an extra-hard time.

It does feel like we are in a big shift of some kind . . . with so many of us feeling that we are going to fall through the cracks. I've had a very gloomy week -- hearing of so many deaths and people (some of them young) being diagnosed with cancer. I wonder if the general stress, which feels like a cloud of pollution, is starting to affect our health . . . and not just our bank accounts.

I can't believe the Virgin Megastore is closing. I worked there twice, each time for more than a year, and each time it was my first job in San Francisco (I moved away in 2001 but came back 3 years later). At one point I came to think of it as "The Evil Place," but it has sentimental value to me, and it saddens me that it will be no more.

"A Tale Of Two Cities" was my favorite Dickens novel. I found Madame Defarge's knitting (names of people on the hit list, so to speak) to be chilling and yet thrilling (since I didn't realize what she was truly doing till late in the book, when our English teacher revealed it to us). And I LOVE this spoof of it in Mel Brooks' History Of The World Part I:
http://www.youtube.com/watch?v=s4uvLXCUhVg

I am also a fan of Dickens. I am also very worried about the future. I own 25 horses and they need to be fed. It never leaves my mind.

You have a good friend for giving you a lovely treat. I hope to just be able to say I survived, so I'm not looking for any treat.

dikensian times indeed. david copperfield is the one that sticks in my mind best. i always got vaguely sick to my stomach reading dickens. speaking of which, i saw the freidman on the plane yesterday in the IHT.

good girl, not having a credit card. but how do you function in the world without one? how do you do amazon and moo and paypal? how do you order plane tickets?

anyway, all this GEC talk and virgin closing makes me feel a little bad about my fabulous new camera. does it help that it was my new boss's and now he's ordered himself a D700, so i could have the D300? so it's technically used.

I have mixed feelings about the GEC. The dot.com melt down was one of the best things to ever happen to San Francisco, but I'm less optimistic about this one.