If I could hold you for one hour more. 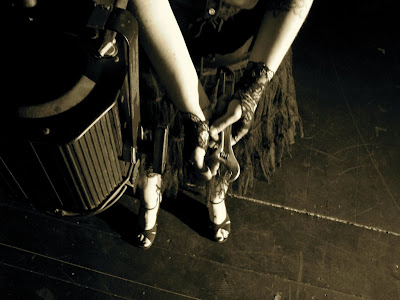 You've got to watch out for Red Shoes. Not only is she one of the most gorgeous people I've ever taken a photo of, but she knows her way around scaffolds and electricity and wires and has a toolbox way bigger than yours.
When Red Shoes asks you if you want to see one of the plays she's been working on (as a lighting designer extraordinaire, and you DO want to see her shows), she forgets to tell you to bring Kleenex or a hankie.
So far, because of Red Shoes, I have spent hours with the murdered and fallen souls at the siege of Troy, the first woman to die in the electric chair, and now a dysfunctional family who made me laugh until one of the family dies from AIDS. I'm glad I was wearing a cotton scarf around my neck, because it's the only thing I had to wipe my eyes with for the last 15 minutes of Falsettos. (Just so you know, I've enjoyed every minute of what I've seen.)
I came to this play for the rumors of the disco ball and the gefilte fish and ended up sitting with a room full of people, many older male couples, who were all blinking away tears.
No simple answers.
But what would I do
If you had not been
My friend.
My friend.
My friend. 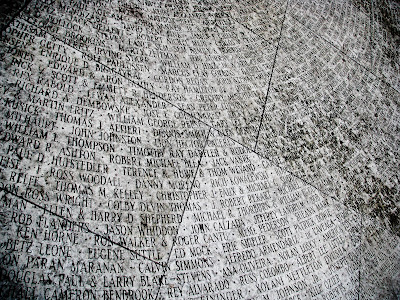 ***
Seeing this play tonight really resonated because of someone I met on New Year's Day. 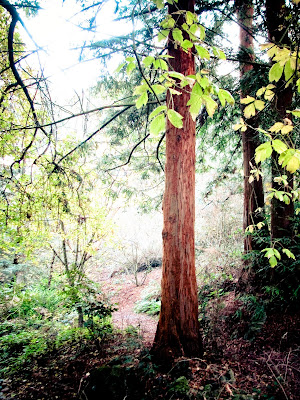 In Golden Gate Park, one of the most lovely places you can walk around is the National AIDS Memorial Grove. A lot of people don't even know it's there, but it's a gentle and serene place where the spirit is soft and comforting. There is a dell of redwood trees, and well tended paths that are always quiet and peaceful.

When you enter the grove, you see this. They are the names of people who have passed away from AIDS, or those who generously try to find a cure so many years later. The names cover much more of the ground than you see here. This is all I could fit in my field of view.

On New Year's Day, I wanted to walk there.
As I headed into the grove, instead of just the empty sanctuary, I saw this gentleman and his Christmas tree. He was carefully taking the ornaments off of the tree and placing them in a plastic bucket. It was quite cold outside and he had a lot of ornaments to take off of the tree, so I asked him if he needed any help. He looked surprised and happy, so together we spent at least an hour undecorating the tree and talking. 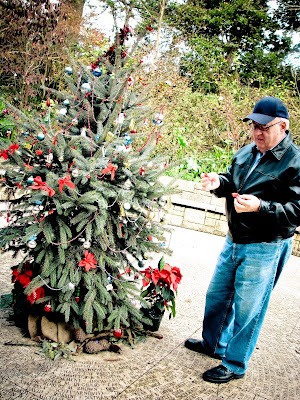 Turns out that he's one of the people who first helped to reclaim a swampy mess full of homeless encampments in the park and turn it into the wooded, beautiful sanctuary it is today, a place that gives solace to many, even those whose lives have never been touched by loss.

As we packed up the ornaments, he showed me a faded red ribbon, with the name "Stephen" written on it in black marker. Look, he says, this was my partner. We were together for eight years before he died. He told me how they met (car breakdown on the side of the road) and about the holidays they shared, with extended family and his partner's children from a previous marriage, all grown up now. He put on a happy face and we changed the subject.

Tonight, when I saw this play, I could not help think of this kindly man and his Christmases past, and the Stephen whose red ribbon still makes one person very happy to remember him. Find someone you love right now and give them a hug if you can. I'm going to. He's asleep but I'm going to hug him and try not to wake him up.

ps.: There is a documentary being made about the National AIDS Grove. You can learn more about the film and watch the trailer here.

A very lovely, touching, and important post. Thank you.

I come nearly every day to see what lovely experiences you are having across the way- I usually end up in happy tears but don't write because I don't want to gush like a 6 year old. Today my inner 6 year old is feeling bold and I'm crying particularly hard at your newest post so if you don't mind...I love your blog. I really, really do. Really:)

Hugs are definately in order.
It's that kind of day everyday around here.

AIDS has touched all of our lives. A friend of mine died about eight years ago. In the end, a heartattack on his weakened immune system.

I will go watch this trailer, and see this magical place of enlightenment. Thanks for sharing. xoxo

You always know just what to write and just how to write it. Gives me the chills and tingles.

Sometimes, when you read someone else's prose, don't you ever find it flowing across the screen of you mind as if you had written the words? Like when you're listing to live music and your lips are moving and you don't hear your own voice coming out, but that it blends so perfectly with the voice your hearing that there seems to be no difference? Its as if your voice raises to the beauty of the voice you join in song? When I write, I hear the music of the language in my head while my fingers simply take dictation. I do not mean to complement myself in this, but I have to say that sometimes when I read your language I feel as if I had written it. How lucky I am.

Having lost my cousin to AIDS at the age of 35, this post touches me deeply. Thanks for higlighting National Aids Gove.

this brought tears to my eyes. beautiful and poetically sad

this is a very special post dear tangobaby. thank you for acknowledging the hearts affected from this disease.

Can I say I love living vicariously through this blog of yours. it's liek i get all the great stuff of living in a great city without the hassles of living in a city!

People say that the Internet is to blame for the lack of societal connections. That there's a complex that will eventually make people more withdrawn and less social.

I beg to differ - there is so much generosity and humanity in his post alone. And you're able to share the beauty of it with the rest of the world - a real humbler, food for thought.

Could you be any more creative. I enjoyed this post very much. Can't wait to see what you will come up with next.

The way you tied in the play, the memorial, the tree story...so sensitive and beautiful. What a great heart you have...your compassion and welcoming innocence are charming. And your curiosity and willingness to share takes us along with you.

The grove sounds like such a beautiful place to be. I loved this post...you are very good at weaving things together very subtly and beautifully. I hugged my man. Thank you reminding us all to love.

What a lovely and moving post. I have lost too many friends to AIDS and always get emotional around the subject. Thank you for sharing your photos. It is indeed a beautiful tribute. I did not know such a place existed.

What a beautiful post and a strong reminder that we cannot take anything for granted, especially our loved ones. That we must treasure each moment that we have with them.

I am so glad that I came here to read your latest post. It touches the heart. How amazing that you met the man with the tree and shared his story. Thanks for sharing your adventures and your thoughts. A wonderful post, really.

Thanks for your lovely post. San Francisco sounds like the kind of place where my theatre habit would get a healthy boost.

I wish I were closer.. but you know this already.

I love the people you come across. ; )

I recently came across your blog and have been reading along. I thought I would leave my first comment. I don't know what to say except that I have enjoyed reading. Nice blog. I will keep visiting this blog very often.

thank you for shedding a bright, familiar, and still touching, light to things of this nature...

this story both pulled at and warmed my heart.

Had not heard of this grove...and now want to seek it out. Thanks for sharing this story, which left me with tears in my eyes.