A definition of a professional photographer: A "pro" NEVER shows anybody the mistakes. ~ Anonymous

***
Let's just say that not every day is Photographic Nirvana in Tangobabyland. 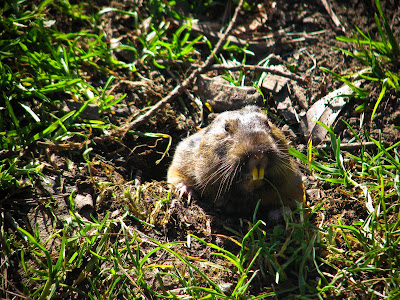 Did you know that rodents as well as humans can benefit from a tooth whitening program such as Brite Smile? I think we need to sponsor this poor dear and get him some Crest WhiteStrips. (Click photo to enlarge and you'll definitely see he isn't flossing regularly either.) 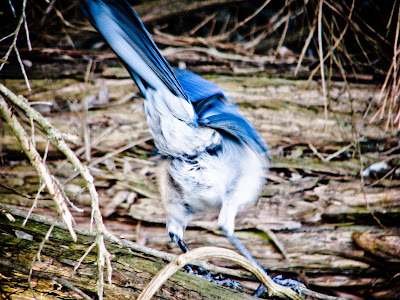 And I was mooned by a blue jay.

But I did get to molest a magnolia and looky at what's inside: 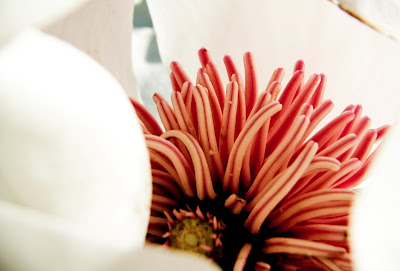 I didn't want you to think I was just screwing around on the first Official Day of the Staycation, and throwing butter on the floor all willy-nilly. I did try to take some photos today, but let's just say that you're not going to see most of them.

I really should go to sleep now. After today's adventure, who knows what tomorrow will bring?! I'm gonna need a lot of batteries.

Sue that bluejay :-)! And I enjoyed your rodent.

he has been doing a lot of work with those teeth..

i love your pictures you have great effects.

keep up the great work!

Oh my! where have you been walking, lady? Is that the beaver from Narnia? :)

You saved the best for last! That magnolia is luscious...its color contrast, softness and unique composition are remarkable. Not an off day in spite of the little birds opinion.

the magnolia is so beautiful!

did the surgeon general say anything about rodents? just curious.

have a great day!

The magnolia's privates are beautiful!

As I said on your photo giveaway "your pictures are breathtaking". The magnolia is simply stunning. Barb

statcations seem to agree with your inner silliness :) the magnolia?? amazing...the beaver... nice smile in spite of the crud in his teeth...the bluebird...needs to wipe more thoroughly next time.

but even with his yellowy teeth, he's so undeniably cute !!

The first picture makes me want to see Caddyshack again for some reason. The magnolia is beautiful. Very Georgi O'Keefe.

OMG! He is adorable, dingy teeth and all. He's all good, he's just needs a good whitening tray and he will be pulling, all the honey's. : )

Nooooo. The rodent looks...sinister, malicious, nefarious, grinning from the depths of his dark, evil lair, concocting a plan to...do something. Maybe nab the camera.

And the magnolia pic is delicious. Close-ups of flowers are the ne plus ultra of nature photography, yep. ;)

tango, did i miss it? i might have been gone and its deep in the history of your blog but please tell me how your Bowling party went!! I am thinking I will have to throw my husband a Big Lebowski party for his birthday too. but i need some ideas!

The bluejay photo reminds me Chuck Keats' (brother to John) Ode to a Mooning Bluejay? or was it Shelley? Oh never mind, I digress...

that bluejay pic is pretty funny...it could go on a postcard or something!

OMG! My cockatiel does that mooning thing ALL THE TIME! Only her wings are outstretched as well. Is that like REALLY MOONING???

I am so loving this little bluejay - I agree with Amy - I can see this as a greeting card. Break-up section of cards. Divorce section. Love it. Also very taken with the lovely inside of the magnolia. I have a magnolia tree in the front yard - although the neighbor thinks it's his, it's not - & it is simply a luscious tree. Love it when it's blooming & smelling quite heavenly.

So far your staycation seems pretty wonderful, and you didn't have to pack or anything. Keep enjoying!

I love bird butts, I know, I am a weirdo. I just think they look so cute and fluffy. There is where the feathers are the softest.