A Perfect Day, Before the Inauguration 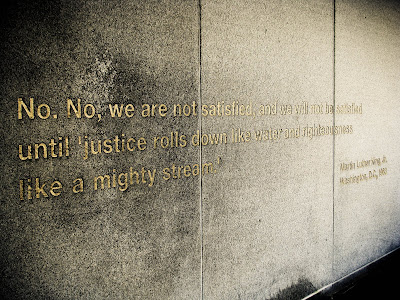 "No. No, we are not satisfied, and we will not be satisfied until 'justice rolls down like water and righteousness like a mighty stream.'" ~ Martin Luther King, Jr., Washington D.C., 1963

Today the Boy and I went to the Martin Luther King, Jr. Memorial in Yerba Buena Gardens downtown. 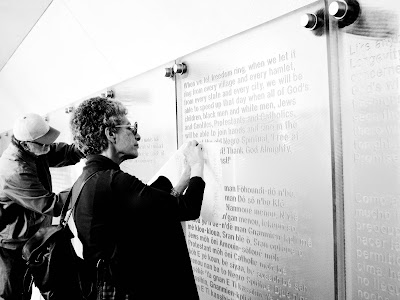 Groups of people were there to read his inspirational quotes. Others were making rubbings of his words, tracing his thoughts onto paper.

It was a glorious day outside. We took the historic F-line street cars up and down Market Street. We love those fabulous old cars. 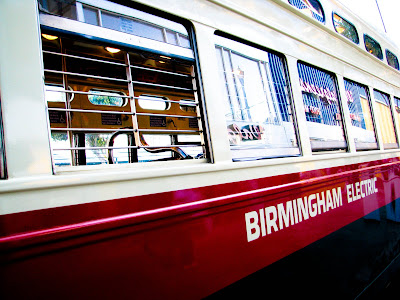 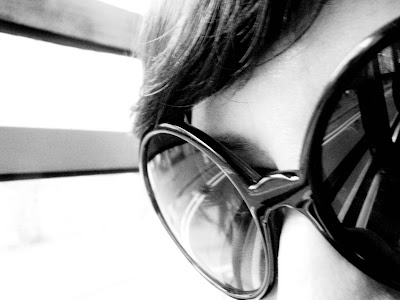 It's always fun just riding around and looking out the window. I liked capturing the street's reflections in my sunglasses. 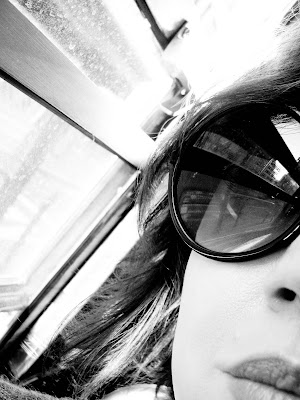 And here's some good advice. 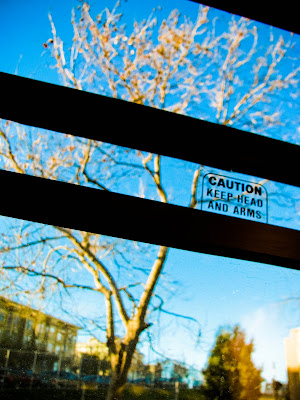 (I know, it's silly but I laughed so maybe you will too.)

We did go to Fisherman's Wharf.. 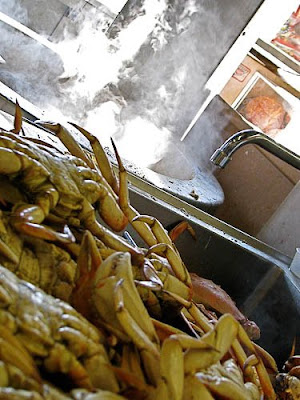 ... and splurged a little on some crab cocktails. 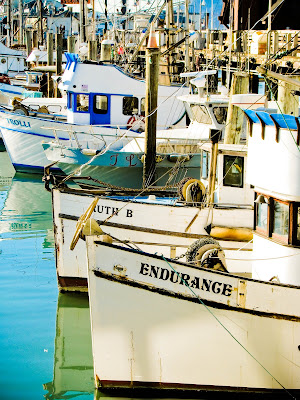 But more than that, I can't believe what's happening tomorrow. 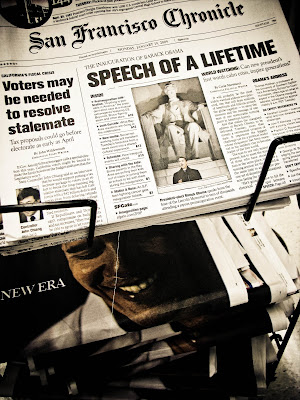 I'm just beyond excited. Beyond.

I'll be going to a simulcast of the inauguration being held outside City Hall. I'm looking forward to being back with a gigantic crowd of excited, happy people, just like on Election Night.

But before that happens, I have one last thing I have to do.

Throw a couple of shoes. 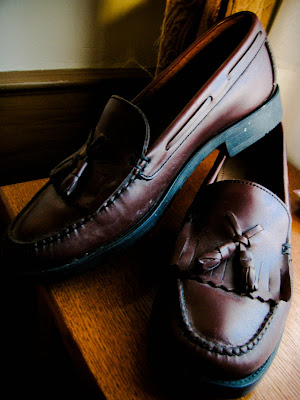 These look preppy enough, don't they?
Isn't this what someone from Kennebunkport might wear?

I know I throw like a girl, but maybe I'll get lucky tonight.

This is where I'll be in a little while:

Welcome to the first ever Potrero Hill Shoe Throwing Carnival. Come throw your old shoes at an effigy of George W. Bush. Donate to a good cause. Cleanse your soul from 8 years of carnage and stupidity. Put the wimpy Democrats on notice.

All shoes will be donated to an organization that distributes them to the needy in the US and worldwide.

I'll let you know how it goes. I feel some real catharsis is going to happen tonight.

ps.: If you wish you could be with us, throwing a shoe in very good company, I will happily envision you standing beside me, helping to guide my almost new Bass Weejun to the right place/face. 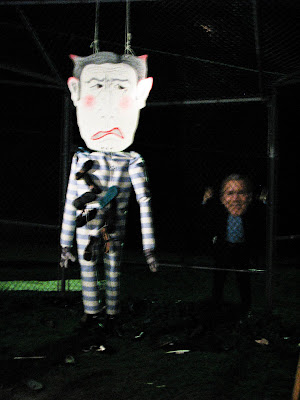 UPDATE 10:22pm: The shoe throwing was really fun, mostly a neighborhood event. We paraded around the field with our shoes singing "Na Na Na, Na Na Na, Hey Hey Hey, Goodbye!" Then the large Shrub was festooned with a garland of shoes while another fellow wearing a giant cardboard Bush head read some Bushisms aloud.

And then everyone started throwing shoes (although politely taking turns). I gave one of my loafers to Chipmonkey because she didn't have a shoe to throw. There was also a 21-shoe salute, at which time the Shrub's head started to separate from the body. A few more shoes and all that was left was part of a head. (A local news station was there. If there's any decent footage, I'll let you know.)

And then we went and had a whole mess of pizza. I have to admit it: it felt good to throw my loafer (I hit a knee). I don't know if throwing a shoe will restore our Constitution but knowing that I might never hear the word "nucular" again makes me almost giddy.

Posted by tangobaby at 5:42 PM

And yes sweetheart, those shoes do look like they would have been worn in Kennebunkport. This is just a perfect ending... in so many ways.
xxoo

Yes!! Tango Bebe,
You had the Perfect Day! Well, methinks you deserve it!
Let's let the loafers fly tonight, cause tomorrow is a brand new day!!!!!
Thank you for the link!
I believe in miracles, don't you?
xox
Constance

Must tell you how lovely your banner is!

Hi tangobaby, I will keep my arms and legs while I envision you hitting your target dead on! Have fun!

Darling tangobaby I am so excited for tomorrow, for some reason I cannot take Mahalias Jackson's Joshua Fit The Battle of Jericho off my head. Hallelujah!!! I'll be crying tears of joy. But Alas, guess who is moving to Dallas? Yep...Lady Laura and W just bought a house a short distance from where I live. You can send me your shoes via FedEx, I'll be more than glad to deliver them (airborne that is!!!)to their rightful recipients.

I've been reading for a while, but haven't commented until now. Just wanted to say I always enjoy your pictures/adventures/insight, and wish I could be shoe-lobbing as well tonight!

:) I love the shot...and, actually that quote is also on the Civil Rights Monument in Montgomery, Alabama. I will go take a shot of it when I move back for you. TOmorrow is a very exciting day.

Reading this made my morning. Totally. Now I think Im almost ready to deal with my bunch of noisy tribal women in our handicraft workshop...lets see...if they dont behave I will threaten to throw my shoes at them =) although Im only wearing slippers...

Sounds like the perfect San Francisco day (sob, so homesick reading this)...Today (in Paris, it's already here) is the dawn of a new era. Hallelujah! xoxox

Beautiful post. Thanks for guiding us through your lovely city.

This post was perfect. What a day you had! What a finish to it! Your last sentence was the icing on the cake!

Today is THE DAY. I am glad I read this post before dawn to start this day off. Feeling giddy myself.

Hahaha - I bet old George wasn't too happy about it, but I guess that was the point. Sounds like you all had lots of fun. Plus, you made me hungry for pizza. Great idea for dinner!! Love the photos of your day out - the weather does look great, so summery. A bit like here!!

PS. I've never had fresh crab before - was it goooooood?

this is what i call a VERY good day!
it's tuesday nooon here and i feel so excited for my American friends...Allelujah !

i read a very funny article today about Sarkozy's being fascinated and envious of Obama's popularity. Our poor French president still doesn't understand politics at one point involves talking/listening to people and winning their heart.
He prefers to shout a lot and show off with...shoes like the ones in your pic...(but preferably John Lobb of course)

I envy you your sunglasses Tango. Come to think of it...I envy seeing enough sun to require sunglasses! Love the boats photo too, I'm a sucker for blues. Sounds like you had quite the interesting night last night! Unfortunately, my father-in-law is one of 'those' guys who loves to advocate 'nucular' energy. I may still be forced to listen to it at family dinners.

I would have LOVED to throw a shoe, even if only at an effigy! Goodbye, good-riddance, don't let the door hit you on the way out.

This was Great! really Tangobaby- you gave me a staycation! I had a great time in your pictures and I'm looking foward to your next post. Happy Time Off...

sometimes just reading along is the greatest pleasure. =]

A toast to you! Here's to a return of hope for our country which we love.

Ever since I read about Obama's first election victory i have been lukewarm. http://thinline.blogster.com/obamas-election

We'll see though. Haven't been any honest politicians from Illinois in quite a while. Maybe he will change that trend.

It totally looks like fun. I linked this post in my latest blog titled 'perspective'. Check it out! But glad you had fun!

Great great even awesome photo story telling. We need a name for this specific type of blogging like Photoblogging, or Photojourney's something like that. It would have been better if the subject matter wasn't so sad. If only we could have elected GW to 4 more years he would have won the election in the landslide. He will go down as one of the greatest leaders in history!

catching up..i SOOOOoo wish i'd been there for that whole day! especially the need for sunglasses. :-) it would have been a pleasure to throw shoes like a girl with you.